The other day my friend Kendall made me aware of a German-American association. Looking through their photos, I found a fascinating poster. The quality of the poem is questionable, but what caught my eye was the sailing ship. It flies St. George's Cross and the flag of the Bundesflotte (Federal Navy) of 1849. 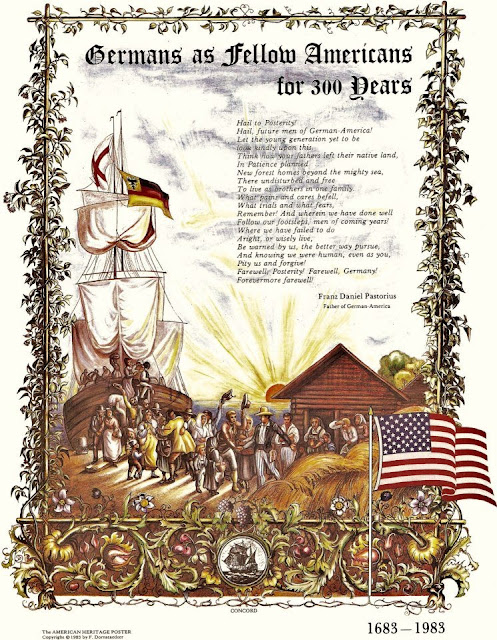 Going back in history, the year 1848 was a year of revolution all over Europe. Following the defeat of Napoleon, the Congress of Vienna in 1815 restored power to the previous princes and dukes with the constraint that they should become constitutional. The 38 German States were bound together in a Confederation and represented in a Bundestag (Federal Assembly) that met in Frankfurt under the presidency of the Austrian Emperor.

Constitutions the princes imposed on their people were in some cases not even worth the paper they were printed on. In the case of Baden having the most progressive constitution in all Germany, the Grand Ducal government frequently ignored the granted liberties. However, in the spirit of the American and French heritage, people demanded democracy and equal rights.

The revolutions that broke out in 1848 in most German states were violent with bloodshed as in Berlin (Prussia), Vienna (Austria), or Dresden (Saxony). Although the rulers eventually managed to quell the uprisings, they nevertheless were shocked and consented to the universal election of a Nationalversammlung in all German territories. This National Assembly likewise met in Frankfurt.

Without going into the detail of the many verbose deliberations at the Paulskirche (St. Paul's Church) where the delegates met, it was the First Danish-German War that shaped the Nationalversammlung profoundly. The Danish king had annexed German-speaking Schleswig ignoring the motto of the two territories Schleswig and Holstein: Op ewig ungedeelt. The slogan Eternally unseparated expressed in Low German is still valid today.

A federal intervention army soon came to grips with the Danes on land who, however, remained masters of the seas blocking the German harbors. The Confederation had no navy.

On June 14, 1848, the National Assembly by a vast majority authorized a credit of 6 million talers (possibly more than 6 million dollars) for the construction of a German navy. Besides, private sponsoring born out of a national feeling became important. On March 18, 1849, Rear Admiral Karl Rudolf Bromme (called Brommy) became Commander-in-Chief of the North Sea Flotilla with his flagship Barbarossa in Brake, Lower Saxony. The seaport of Brake became, at this time, the provisional naval base of the first German fleet. Brommy had served in the Greek navy and spoke fluent English, which he had learned while working for the American merchant marine.

The flag of the Federal Navy showed the colors black-red-gold and the Imperial Eagle. By 1849 the fleet was composed of a couple of steam frigates and corvettes but in particular, was proud of two sailing ships, the frigates SMS Eckernförde, and SMS Deutschland.

Due to financial and political problems, the first German navy had a short life. Most ships were sold, and on March 31, 1853, Brommy signed the dissolution order. On April 1, with the disestablishment of all naval authorities, and the release of the personnel still in service, thus ended the history of the first German navy.

Coming back to the poster. Following the collapse of the 1948/49 Revolution in Germany, many of the participants fled to France or Switzerland from where they emigrated to the States. Some of these Forty-Eighters became known in the US, such as Gustav Struve as a journalist, Friedrich Hecker, as farmer and publisher, Lorenz Brentano as a member of Congress, Carl Schurz as US Secretary of Interior. He also fought in the Civil War as many others as Louis Blenker, Alexander Schimmelpfennig, and Franz Sigel. They all came to the States on British or French carriers.

Unfortunately, the poster does not show a historical event. Nevertheless, it makes me dream about some Freiburgers who - following the occupation of their city on July 7, 1849, by Prussian troops - fled and eventually embarked for the States on a ship of the Federal Navy flying the Federal Insignia and Freiburg's flag with St. George's Cross too.

Click on the following links if you want to read more about the Revolution in Baden or about the Bundesflotte in German.
Eingestellt von Red Baron um 15:12