In high school our English teacher had us read Chaucer, Shakespeare, and Eliot, we knew everything about British and American history but when I left school I was unable to order a beer in the UK. Instead of doing conversation we were writing compositions. When the teacher handed us back our texts he always had two complaints: prepositions and idioms. He admitted that using the correct preposition was the most difficult thing in any language. As far as idioms were concerned Dr. G. told us that only one German expression translates literally into English and keeps its meaning: Im Bilde sein (to be in the picture). 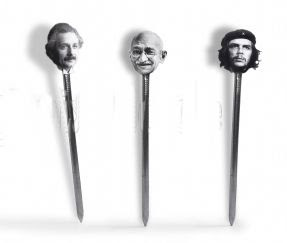 I like idioms and liked to translate German expressions for my English and French speaking colleagues at CERN. My favorite was: Nägel mit Köpfen machen (to make nails with heads) meaning that after all those long discussions we finally have to get down to work. When I tried my translation on my colleagues I looked into blank faces. Why should they be impressed when there are three English idioms expressing the same thing: We really do need to get down to brass tacks, we need to put wood behind the arrow (that will increase its momentum and boost its impact), and we must put our money where our mouths are.

Then there are a few askew comparisons the so-called false friends that are not lost but misleading in translation: Does auf den Busch klopfen (beat on the bush) translate into beat around the bush? Both expressions are taken from the hunting jargon but their meaning is not the same. While auf den Busch klopfen is done in German to sound things out to get information, beat around the bush means in English avoiding clear statements or talking around an issue.

Idioms are deeply rooted in a language and their translation into other languages is seldom successful. One typical example would be the German proverb: Morgenstund' hat Gold im Mund that translates into: The early bird catches the worm. However something strange happened. The English early bird and the worm are slowly but surely replacing the German morning hour and the gold coin. Is it the archaic picture of a gold piece in the mouth or simply the threefold alliteration* in the German translation: Der frühe Vogel fängt den Wurm that made this expression so popular in Germany?
*Alliteration was the archaic form of the rhyme in Germanic languages before the end-rhyme took over. Popular examples of alliterations are: Brot und Butter (bread and butter), Himmel und Hölle (heaven and hell)

Not only Red Baron but other people too like to play or experiment with languages. There are three German sayings that the vernacular has long since combined into one: Das schlägt dem Fass die Krone ins Gesicht > That hits the crown into a barrel's face. Here come the three ingredients:

Das schlägt dem Fass den Boden aus > that knocks the bottom out of the barrel > this really takes the biscuit, i.e., something outrageous happens. In olden times knocking the bottom out of a barrel was practiced by controllers who wanted to be sure about the spilling of a bad wine or an untaxed beer.

Das ist ein Schlag ins Gesicht > that is a slap in the face.

Sorry, folks, I again went back to my old habit of trying to translate German idioms into English.
Eingestellt von Red Baron um 15:05