Although Halberstadt has a big cathedral and an important chamber for its Medieval church treasure Red Baron regards Halberstadt as Gleim City. Gleim who?

Johann Wilhelm Ludwig Gleim born in 1719 was a German poet well known in his days among his peers; today his name is nearly forgotten. In 1747 he was appointed secretary of the cathedral chapter at Halberstadt. From then on Gleim created a network of friendship among his colleagues where in those days letters instead of e-mails were the means of communication. For his kind-hearted patronage of young poets and would be writers they soon called him Father Gleim. Many of his young colleagues counted on the support of the genius of friendship, paid him a visit or even came to Halberstadt for longer periods.

Since 1648 Halberstadt and its surroundings belonged to Prussia. Gleim adored his king calling Frederick the Great the One and Only although the latter never became a friend of German literature for he preferred French language, literature and philosophy. Gleim eventually met the king in December 1785 only a few months before Frederick's death.

In his Halberstadt residence Gleim created a Temple of Friendship (Freundschaftstempel) starting a collection of portraits of his friends. Still today two rooms in the Gleimhaus are devoted to those paintings that numbered more than 120 by the time of Gleim's death. Here are a few of his friends:

Goethe did not like Gleims sentimental Anacreonic poetry that in his eyes succeeds only with wenches and gentlewomen or was Goethe just jealous again?: These females think only about sentiments, words, and verses when they regard a poem as beautiful. Nobody realizes that true power and effect of a poem depends on situations and motifs. However thousands of poems are made where the motif is zero. These pathetic efforts pretend an existence with the help of sentiments and tingling verses.

Nowadays at the Gleimhaus there use modern techniques. In the following Johann Gottfried Herder posted his status on Facebook as early as 1780: It is a real shame that Gleim and Goethe do not get along well otherwise today Goethe could be with us too. A truly great spirit.

Gleim, one of Herder's friends, commented in his typical style: Well beloved brother Herder, Goethe is a great head but does he have a heart like us? What makes a true poet, what makes a good man?

Herder answered excusing the genius: He cannot show his heart as he would like to. His poetry impresses me again and again. Not only the Werther.

Gleim loved young poets. To have Jacobi permanently near to him Gleim procured him a sinecure of a canonist at Halberstadt's cathedral. Promptly Lichtenberg called Jacobi a doctorem jubilatum who laudably served as a professor and now retired at Halberstadt. In fact, a the Gleim-Haus Red Baron learned that although Jacobi had taken the post (and money) he rarely was in Halberstadt. On top of it Lichtenberg ridiculed Jacobi's Anacreonic poetry:


Here are some impressions of Jacobi's working place, the Cathedral of Halberstadt. The church St. Stephanus und St. Sixtus was built as a somewhat late answer to the cathedral in nearby Magdeburg. In fact, in the year 968 the Archbishopric of Magdeburg was attributed half the eastern territory of the much older Halberstadt Bishopric of 804. 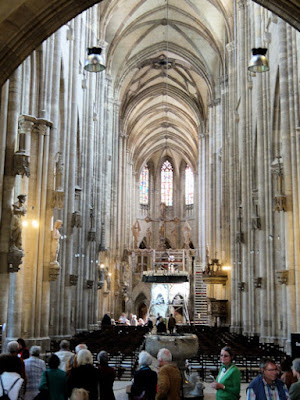 Unfortunately there was not enough time left to listen to John Cage's Organ Art Project in Halberstadt's Buchardi Monastery, a concert named as-slow-as-possible. It started in 2001 and will end in 625 years: