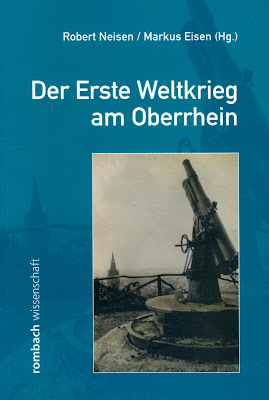 The other evening Red Baron assisted in a book presentation at Freiburg's Wentzingerhaus: Der Erste Weltkrieg am Oberrhein (The First World War on the Upper Rhine). Many books have already been written and lectures given about Europe's Urkatastrophe (primal catastrophe) so the number of people present was astonishing.

Some of the attraction was certainly due to Professor Gerd Krumeich who presented the book in his usual compelling way distributing praise to the various authors of the anthology describing how the people experienced the Great War in the Upper Rhine region. Although I had reported earlier about the topic the present book using the information of personal diaries stresses even more intimate views.

I shall limit my blog to German enthusiasm for war and unconditional air warfare.

The prevailing view is that Germans enthusiastically hailed the outbreak of the Great War. In fact, not only young Thomas Mann regarded the war as a purifying act; it was a theologist at the University of Freiburg who on August 5, 1914, wrote: Ist es nicht eine Gnade Gottes, die unser deutsches Volk vor dem Versumpfen bewahrt? Hat man nicht immer gesagt, wir brauchen einmal Krieg, der uns moralisch aus der Niederung und politisch aus dem Parteihader herausreißt? (Is it not the grace of God that keeps our German people from going to pot? Haven't people always said that we need a war to tear us away morally from decadence and politically from party discord?) This man had no idea about a pluralistic society and the basic elements of democracy.

It is true that most teachers at Freiburg's University were shocked by the imminent war. Three professors, a historian, a classical philologist, and an anatomist, had dinner when they learned about the breaking-off of diplomatic relations between Austria/Hungary and Serbia. They immediately broke up their meal with the historian writing in his diary: Mit einem Schlage war das Festmahl zu Ende und in tief ernster, ich muß wohl sagen bedrückter Stimmung gingen wir durch die Kaiserstraße nach Hause, vorbei an dem Siegesdenkmal von 1870, um das sich eine Studentenschar gesammelt hatte und jubelnd die Wacht am Rhein sang. Uns Alten war hier nicht zum Jubeln. Das was jetzt vor uns lag, war viel dunkler und unberechenbarer als das was einst im Juli 1870 aufgeflammt war. Von dem Willen aber, stark und entschlossen zu bleiben, waren wir alle erfüllt (All of a sudden the banquet was over and in deep concern, I should rather say depressed mood, we went home through Kaiserstraße. In passing the Victory Monument of 1870 we saw a group of students jubilantly singing "Die Wacht am Rhein". We, the old professors, did not feel like cheering. What now lay ahead was much darker and less predictable than what once had flared up in July 1870. Nevertheless, we three were suffused with the will to remain strong and resolute).

In fact, most Germans in particular farmers, craftsmen, retailers, and industrial workers, had no war fever but simply performed their duty: The Fatherland calls and so we must go. A mother knitted a scarf for her son leaving for the front reading: Gott sei mit dir (God be with you). This was so different from the official bombastic slogan engraved on all German military belt buckles: Gott mit uns! (God is with us!).


It is astonishing that the invention the Brothers Wright had made in 1903 was already used as a military weapon ten years later. Already in 1914 airplanes flew missions against military objects but as early as December 1914 against civilians too. Particularly Freiburg was within reach of enemy planes and suffered a total of 25 allied air raids during the war killing 31 persons in total.

The front cover of the book shows an anti-aircraft gun on Freiburg's Schlossberg. Russian pieces of artillery captured on the Eastern Front had been converted into Fliegerabwehrkanonen (Flaks). When fired these guns made lots of noise but turned out to be completely inefficient. Interceptor aircraft stationed in Freiburg needed thirty minutes to reach the necessary height while it took enemy aircraft only one quarter of an hour from their bases in France to reach the city.

The daily arrivals of wounded soldiers from the nearby front and the more and more precarious food provisioning were clear signs that Germany was at war. However, it was the air raid on April 15, 1915, causing the death of eight children who had played outdoors and of one adult that confronted the Bobbeles* with the fact: Freiburg is a front city. Suddenly people felt unprotected, uncertainty and fear were creeping in. Some historians claim that this was the beginning of total war.
*nickname for a Freiburger