This is the next-to-last blog about my trip to Lutherland covering Eisleben, the town where Martin Luther was born in 1483 and where he died in 1546.

The boy born in the town of Eisleben on November 10, 1483, to the Luder family was baptized Martin in accordance with the Saint of the following day. 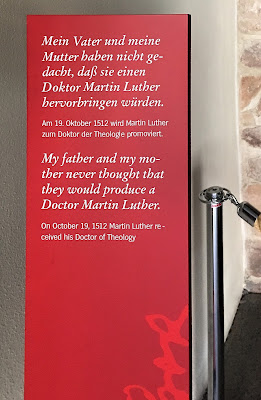 At that time the word Luder* meant, in hunters' jargon, a bait for hawks and falcons. So it is likely that Martin did not quite like his surname. In fact, as a student following his educated contemporaries who preferred Greek or Latin to German names Martin started signing his letters with the Greek Eleutherios meaning "free". According to some historians Luther understood himself to be a liberated man following the publication of his 95 theses. Shortly after 1517 Martin adopted the German name Luther.
*Today's meaning is hussy

Luther's father wanted his son to become a lawyer but Luther junior became a monk, priest, doctor of theology and professor at the University of Wittenberg after young Martin had his experience of faith not on the road to Damascus but on the road between Eisleben and Wittenberg.

Here are some pictures taken inside and outside of Luther's birthplace.

Key issues of the Reformation were the Catholic sacraments of which Luther only retained two: infant baptism and communion, albeit in both kinds.

In adopting the swan Luther was referring to Jan Hus the reformer burned as heretic in 1415 during the Church Council at Constance: In Constance they roasted a goose but one hundred years from now they will listen to a swan, singing, where Brother Martin clearly meant himself.

Luther himself wrote about the meaning of the rose he had started to use as a seal for his letters in 1530: The first should be a black cross in a heart, which retains its natural color, so that I myself would be reminded that faith in the Crucified saves us. "For one who believes from the heart will be justified" (Romans 10:10). Although it is indeed a black cross, which mortifies and which should also cause pain, it leaves the heart in its natural color. It does not corrupt nature, that is, it does not kill but keeps alive. "The just shall live by faith" (Romans 1:17) but by faith in the Crucified. Such a heart should stand in the middle of a white rose, to show that faith gives joy, comfort, and peace. In other words, it places the believer into a white, joyous rose, for this faith does not give peace and joy like the world gives (John 14:27). That is why the rose should be white and not red, for white is the color of the spirits and the angels (cf. Matthew 28:3; John 20:12). Such a rose should stand in a sky-blue field, symbolizing that such joy in spirit and faith is a beginning of the heavenly future joy, which begins already, but is grasped in hope, not yet revealed. And around this field is a golden ring, symbolizing that such blessedness in Heaven lasts forever and has no end. Such blessedness is exquisite, beyond all joy and goods, just as gold is the most valuable, most precious and best metal. This is my compendium theologiae [summary of theology]. I have wanted to show it to you in good friendship, hoping for your appreciation. May Christ, our beloved Lord, be with your spirit until the life hereafter. Amen.

For our group it was only a short walk from Luther's birthplace to the place where he died. Actually the building now sold as his last residence is different from the place where the reformator closed his eyes.

Why did Luther die at his birthplace? In 1546 the noble family von Mansfeld called on him as a known authority to serve as a mediator in a family quarrel. Luther suffered from obesity but despite being rather ill he hit the road to Eisleben. In a letter to his beloved wife Käthe (Katharina von Bora) he wrote: Wenn ich wieder heim gen Wittenberg komm, so will ich mich alsdann in den Sarg legen und den Maden einen feisten Doktor zu fressen geben (When I come home to Wittenberg, I will lie down in a coffin and give the maggots a fat doctor to eat). His last letter home, however, is full of joie de vivre as you may read on the left.


What follows is Luther's last prayer on his deathbed: 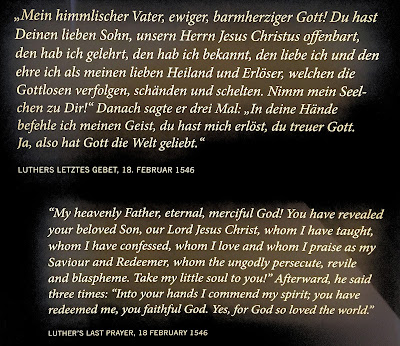 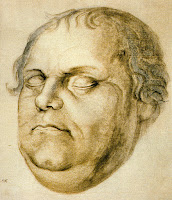 
May Martin rest in peace.

Following Luther's death his wife Käthe stuck to Christ like a burr to cloth. She died from a road accident near the city of Torgau six years later than her husband and was buried in Torgau's Saint Mary's Church. I saw a reproduction of her epitaph in Luther's "last residence".

Outside the building we were reminded that Luther like most of his contemporaries was an anti-Semite ...

... but we also saw young Lutherans singing and dancing in front of the Andreaskirche during a Regional Protestant Church Congress: und du mein Schatz (and you my darling or rather you my treasure). Interesting question: Did King David live like a rogue? 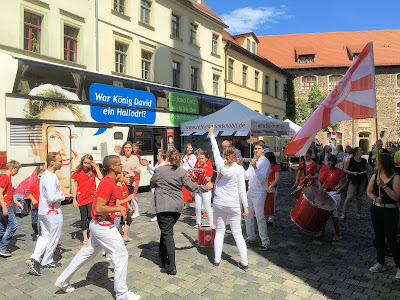 In the aftermath of the Schmalkaldic War (1546/7) the two ruling branches of the House of Wettin, the Ernestines and the Albertines, were quarreling over the electoral dignity. In fact, the Albertine Maurice, although a Protestant, had supported the Catholic Emperor Charles V against his cousin, the Ernestine Frederick the Magnanimous. When the Schmalkaldic League lost in the Battle of Mühlberg against the emperor, Charles withdrew the electorship from Frederick and bestowed it upon Maurice. Although the following text refers to Ernestine Wittenberg, Luther's newly cast bronze epitaph never made it to the Reformer's burial place in the Schlosskirche. The Albertines kept the bronze in Jena's Michaeliskirche.

Although Luther propagated the German language his obituary is written in Latin. Before you try your Latin, here comes the English translation: On February 18, 1546, the noble man, Martin Luther, Doctor of Theology, was recalled from this mortal life at the age of 63. At the moment of his death he who had consumed his soul for God in his faith for our Lord Jesus Christ had firmly witnessed that for the Church the teaching he had lived is true and necessary. His corpse is buried here after he had built the congregation faithfully and fearing God in this city for more than 30 years. How beautiful upon the mountains are the feet of the messenger of good tidings, that announceth peace (Isaiah 52:7).
#
Eingestellt von Red Baron um 11:40