Not only my friends in Madison know that Freiburg is an attractive place to live in. Wealthy retired chief physicians from northern Germany and not only those looking for an apartment to buy will pay any price while young couples planning offspring desperately search for an affordable rental flat in vain. Freiburg’s housing market is leergefegt (empty) and prices are at an all-time high.

POTUS campaign pledge was to build a southern wall, that of Freiburg’s young and surprise Mayor Martin Horn was to provide affordable housing.

Enter Dietenbach, a new quarter to be built on farmland located between the recently added quarter Rieselfeld, the four-lane feeder road to the autobahn A5, and Freiburg’s animal park Mundenhof*.
*Madisonians will recall the Prairie Project.


Tomorrow Freiburg’s citizens will be called to the polls to vote in favor of building the new quarter Dietenbach by answering the one and only but tricky question:


Shall the area Dietenbach remain undeveloped? 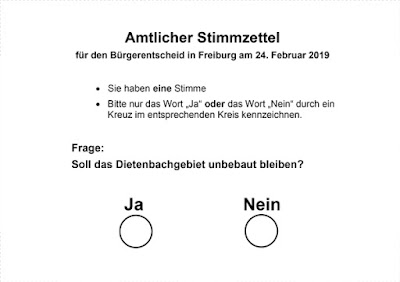 It means that those who like the new quarter to be built must check the Nay on the ballot paper.

Nearly all political parties, i.e., 43 of 48 city councilors are courting voters with the slogan:


Never a NO was so future

Opposition advocating an Aye came from the five deputies of the city council group Freiburg Lebenswert/Für Freiburg (Freiburg Liveable/For Freiburg) and naturally from the farmers losing their land.

There are two facts that perturb Red Baron’s mind. The area on which Dietenbach shall be built is a wetland. So the terrain must be filled up to a height of up to 3 meters. The action group Pro Farming calculated that 66,000 trucks transporting soil are needed polluting the air. Pro Farming called the landfill an ecological madness. 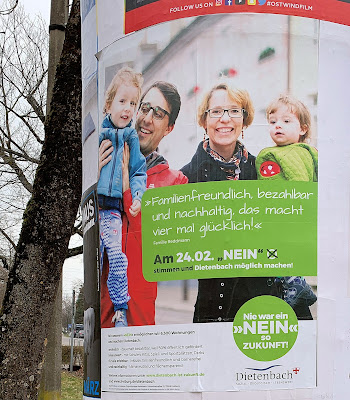 The Ayes give the erroneous impression that once Dietenbach is approved rents in Freiburg will become “Family-friendly, affordable, sustainable, making a family four times* happy.” Only optimists think that Dietenbach’s first buildings will be ready for occupation in 2024 making the children of the happy couple look much older.
*O, I see an already happy family will then be three times happier

It is expected that participation in the referendum will be low. Its result will already be known by 1900 hours ( 7 p.m.). So please stay tuned for an update of the blog tomorrow. 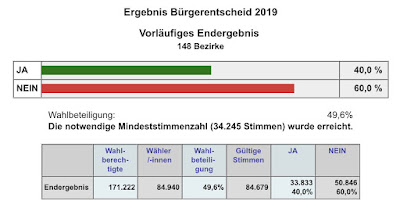 The Nays have it 60 to 40%. Without any decimal wavering, we Freiburgers are clearly split.
Eingestellt von Red Baron um 17:45