While in Berlin Red Baron visited the Emil Nolde exhibition at the old Hamburg train station. Here is the copy of two pages of the flyer (©Nationalgalerie). 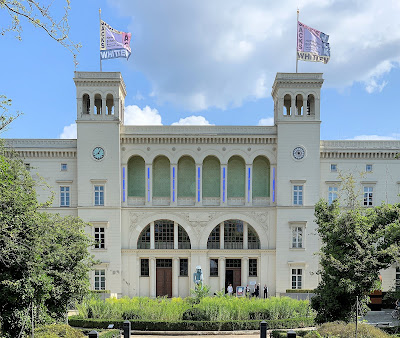 You are looking at the main entrance of the historic terminus for all trains arriving from Hamburg. Like all old cities, Berlin suffered from the fact that trains from various directions ended in railhead stations at the former city fortifications. So there were the Dresden, Stettin, Silesian, Görlitz, Lehrte (Hannover), Anhalt, and Potsdam termini. People who wanted to pass through Berlin not only had to change trains but stations as well, just what the many horse-drawn cabs were waiting for. Only since Germany's reunification Berlin has a Hauptbahnhof (central station) with an upper and lower level where trains running from west to east and from south to north cross and meet.

The building is now called Museum für Gegenwart (contemporary art) and is part of the National Gallery.
The Nolde exhibition was on the upper floor. Red Baron took photos, but it is a pity that the copyright does not permit to show you some of his colorful expressionist masterpieces.

Having understood the statement shown above about Nolde's degenerate art (Entartete Kunst), it is difficult to realize that he was a convinced Nazi and anti-Semite. As Wikipedia writes, "Nolde was a supporter of the National Socialist German Workers' Party from the early 1920s, having become a member of its Danish section. "

In his book titled Years of Fighting* in 1934 Nolde wrote, "At the age of 18 I had seen the first Jew in Flensburg [...] Jews have much intelligence and spirituality, but only a little soul and little creative gift.
*Cf. to Hitler's book "Mein Kampf"

Later "he expressed anti-semitic, negative opinions about Jewish artists, and considered Expressionism to be a distinctively Germanic style. This view was shared by some other members of the Nazi party, notably Joseph Goebbels".

But Hitler was against all degenerate art, "and the Nazi regime officially condemned Nolde's work. Until that time he had been held in great esteem in Germany. A total of 1,052 of his works were removed from museums, more than those of any other artist (Wikipedia)."

Nolde protested vigorously, but some of his paintings were part of the exhibition Entartete Kunst in Munich in 1937. On Juli 2, 1938, Nolde wrote in a letter to Goebbels that he saw himself "as almost the only German artist in the open fight against the alienation of German art*."
*Cf. to Philipp Lenard's book "Deutsche Physik."

On August 23, 1941, Nolde was expelled from the Reichskammer der bildenden Künste (National Chamber of Fine Arts) because of "lack of reliability."

On May 6, 1945, Nolde wrote in his diary, "Hitler is dead. He was my enemy. His cultural dilettantism brought much suffering, persecution, and ostracism to my art and to me. Now he is dead."

After the war, Nolde's exclusion from the National Chamber of Fine Arts was überhöht (exaggerated) as a "ban on painting", though it merely meant a ban on the purchase of all artists' supplies such as oil paints, canvas, and brushes as well as the prohibition of the sale, exhibition, and reproduction of his works.

Nolde was able to continue painting privately, spending his time mostly doing watercolors and flower paintings that were called the "Unpainted Pictures*" after the war when Nolde's role as a Nazi victim emerged. Siegfried Lenz's bestseller novel Deutschstunde emphasized Nolde's victimhood substantially describing the fate of a fictitious painter Max Ludwig Nansen in the Nazi area.
*The watercolors frequently served Nolde as templates for oil paintings after the war

Because of his Berufsverbot (occupational ban) of 1941 and his Absage gegen das Regime (rejection of the regime), Nolde received the note "unencumbered" in his process of denazification.

As a prominent victim of the Nazi regime, he issued several Persilscheine* for friends. In 1946 the man who never studied became an honorary professor. There were no objections. Only one critic called the painter an entarteter Entarter (degenerated degenerator) on the occasion of Nolde's 80th birthday and an exhibition of his works in 1947. In 1952 Nolde received as one of the first persons the new German medal Pour le Merite of Science and Art.
*Certificates to bleach former Nazis, for "Nothing bleaches whiter than Persil" a well known German washing powder

Emil Nolde, as an artist undisputed, but as a human being, he remains forever in the twilight.

P.S.: Until recently Angela Merkel's office in the chancellery was decorated by two Emil Nolde paintings. Our chancellor had them removed given the painter's past.
Eingestellt von Red Baron um 17:50