The trend of changing from casket burial (Erdbestattung) to cremation (Urnenbestattung) has dramatic consequences for the maintenance of cemeteries. Red Baron went to a presentation explaining the development in Freiburg. 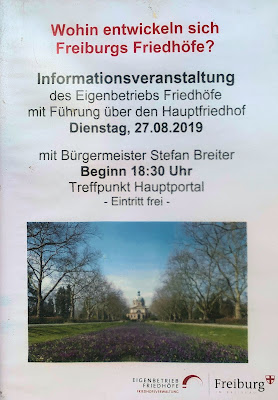 The introductory talk by Freiburg's mayor of finances, Stefan Breiter, was followed by a long walk over the 27 ha (66 acres) main cemetery.

Mr. Martin Leser, the head of Freiburg's cemeteries (a total of 17 !), showed that less surface is needed for burials when nowadays 70% of the people opt for cremation or even have the ashes of their defuncts spread in a grove (Hainbestattung). Ten years ago still, 70% preferred a casket burial. 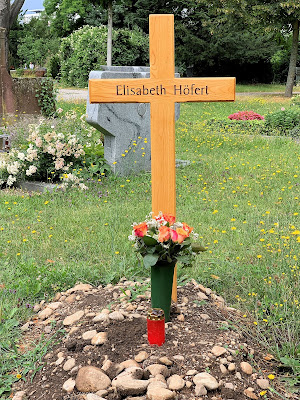 It was Elisabeth's wish to be buried in the traditional way.

We also passed by the fetus burial area. Parents had asked the municipal council for a possibility to express their mourning. Following existing examples, Freiburg's cemetery administration introduced a pond of pebbles. Parents may label the individual stones and write the last letter to their lost babies.

The final discussion took place at the central consecration hall. We were informed that due to less revenue but an increasing workload maintaining more and smaller lawn surfaces between existing and remaining burial sites* the cemetery administration is working on a new financing scheme.
*At Freiburg plots are ”bought” for 15 years. If the burial lease is not renewed, the site is vacated.

To reduce costs, some participants proposed during the discussion that lawn mowing is stopped and wildflowers are allowed to grow.

Here Red Baron learned that meadows need Magerböden (poor soils) while the soil at the cemetery is fertile as required for lawns. This is why in one case, peripherally located plots were liberated and alloted to private gardening (Schrebergärten).

In the end, Mr. Leser summarized his talk:

Cemeteries are central places of mourning and remembrance and should remain so!

Cemeteries will change their appearance by choosing more and more easy-care burials.

Cemeteries must continue to fulfill their function as monofunctional green spaces.