Remember my blog about Bielefeld a place that does not exist? Bielefeld gibt es nicht.

The city of Bielefeld would like to kill the conspiracy theory for good and is offering a reward of one million euros for the definite proof that Bielefeld does not exist.

With this gag, Bielefeld’s marketing department would like to make the city more attractive to tourists.

Schiller is referring to the so-called interregnum when the Holy Roman Empire was without an emperor from 1245 to 1273.

History repeats itself for from August 24 to September 1, Kieser Training in Freiburg is closed for a total renovation of its premises. Depending much on his muscle training Red Baron tuned in, "This will be a kieserlose, schreckliche Zeit."

I still remember the golden eighties when staying in New York on a Sunday morning I hunted for electronics in Jewish shops located on 34th street. Listening to the sales personnel talking Yiddish I nearly felt at home. This came to my mind when I read the following invitation on the Internet: 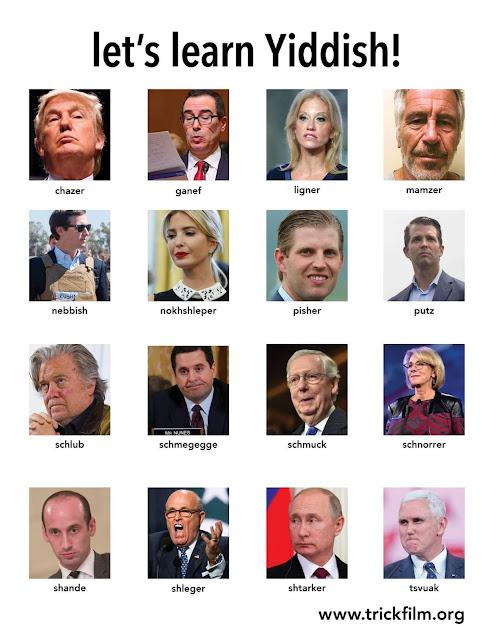 Most of the words are not of German origin but are derived from Hebrew so I had to look them up. Let me start enlarging my vocabulary:

chazer > a pig
ganef > a thief
ligner (Lügner) > a lier
mamser > a bastard
nebbish > a meek and timid person
nokhshleper (Nachschlepper) > a person hanging on becoming a burden
pisher > a pisser
putz (Putzlaputz) > a stupid and worthless person
schlub > a stupid, worthless, or unattractive person
schmegegge > bullshit
schmuck > a jerk, idiot (pejorative for penis);
schnorrer (Schnorrer) > a person asking for small things (cigarettes, a drink) without offering anything in return
shande (Schande) > a disgrace
shleger (Schläger) > a brawler
shtarker (Starker) > a strong person
tsvuak > a hypocrite

Maybe you have already read about Germany’s black zero. During recent years our Ministers of Finance were stubbornly watching that the federal budget remained balanced.

Admire the Schwarze Null formed by the staff in the courtyard of the Federal Ministry of Finances in Berlin. They honor the leaving Wolfgang Schäuble (Christian Democrat) who was followed by Olaf Scholz (Social Democrat).

Presently the pressure is on to behead the holy cow with the blade of new debts. Fresh money is needed for investments in the moderation of the effects of climate change.
Eingestellt von Red Baron um 21:02