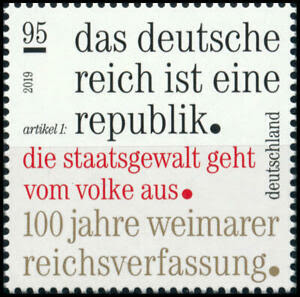 On 14 August 2019, the German Post released a stamp on the 100th anniversary of the Weimarer Verfassung (Weimar Constitution). The text of Article 1 is printed on the stamp:

The German Reich is a republic. The people are vested with the authority of the state.

This was a complete break with the monarchy and an assault on the obedient mentality of the German people. It must have been too much too soon as the dictatorial takeover by the Nazis in 1933 proved. 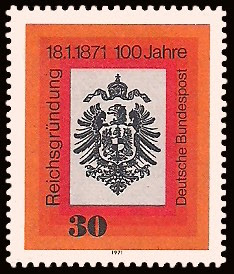 The Weimar Constitution replaced the constitution of the Second Reich that was formed by Bismarck following the defeat of the Erzfeind (archenemy) France. The document's main aim was the unity of the German tribes, so the first article reads very technically:

There is no mention in the whole text about human rights. 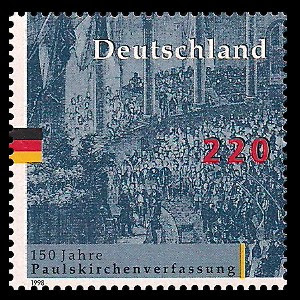 When reading the first article of the Paulskirchenverfassung (Frankfurt Constitution) of 1849, you may get the same impression:

§ 1: The German Reich shall consist of the territory of the former German Federation*.
*formed in 1815 following the Restoration after the Napoleon Wars.

Be not mistaken. Those people sitting together in Frankfurt's Paulskirche and debating had the French declaration of human rights in their brains and hearts. Starting with article 138, we read: 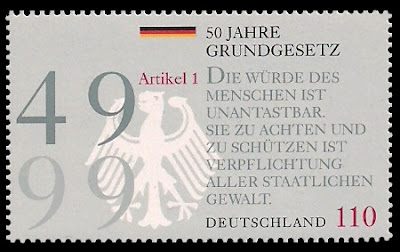 In 1999 the German Postal Service issued a stamp 50 Jahre Grundgesetz commemorating the German constitution of 1949 that the founding fathers and mothers meeting in Bonn humbly called the Basic Law of the Federal Republic of Germany.

As a result of the crimes against humanity of the Nazi regime, the first paragraph of the Grundgesetz reads:

Article 1: Human dignity is inviolable. All state authorities must respect and protect it. 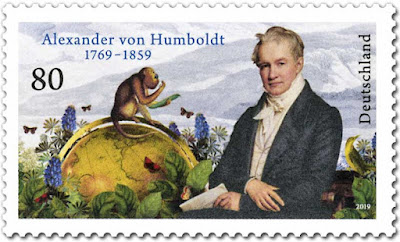 Another special stamp this year commemorates the great Alexander von Humboldt. His achievements in science are extraordinary and well-known, but I did not know that he also had other thoughts.

As a result of his observations during his extended travel at the beginning of the 19th century, he wrote, ”There is no doubt that slavery is the greatest evil of all that has tormented mankind.”

In 1803 Alexander von Humboldt noticed that the irrigation system of the City of Mexico had dried up the nearby valleys and laconically wrote in his diary, "Man rapes nature."

This observation made him one of the first Greens when later he specified more clearly his doomsday scenario, "Man has three ways of destroying nature: By deforestation, artificial irrigation and gaseous fumes." 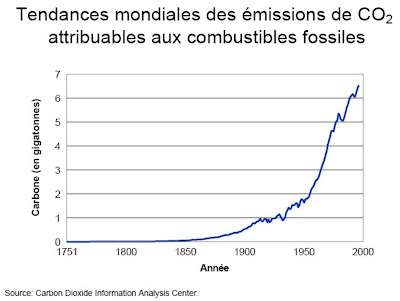 We experience the burning of the rain forest and fights for clean water resources are flaring up, but how did this guy know about the carbon dioxide issue in our times when CO2 emissions from fossil fuels around 1800 were still negligible?

Alexander must have been a gifted speaker too when Goethe judged him: "In eight days you can't read from books what he's telling you in one hour."
Eingestellt von Red Baron um 11:08