On June 10, I introduced splinters, bits and pieces of information that may be of interest to my readers but do not justify writing a blog. This time the splinters from Freiburg will in particular interest my friends from our sister city, Madison.

The Fish Ladder
On Monday, September 16, on my way to the reception for the freshly arrived American students of the Academic Year 2019/2020 in Freiburg (AYF), I passed the river Dreisam on Schwabentorbrücke admiring the new fish ladder.
*Organized annually by the Freiburg-Madison-Gesellschaft (FMG) at the Greiffenegg-Schlössle

The old fish ladder made from wood had become rotten, a process possibly accelerated by the frequent low water levels of the Dreisam laying bare parts of the wood (CC).
*Oakwood permanently kept underwater may be conserved for centuries. 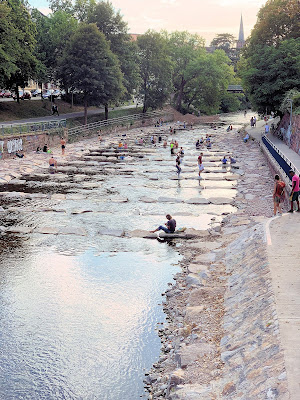 The new fish ladder is made from stones fixed by concrete. Nobody expected it becoming an attraction. In spite of the late hour, people were bathing in the cold waters of the Dreisam, leaving little room for fish to jump. OK, there is no high cotton in Freiburg and in our corn is only growing low due to the lack of rain (CC). 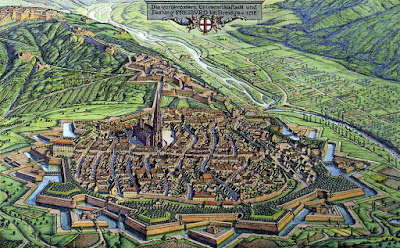 Yes, from 1677 to 1697 Freiburg was a French city under the rule of King Louis XIV presenting an essential link in France’s northern belt of fortifications. 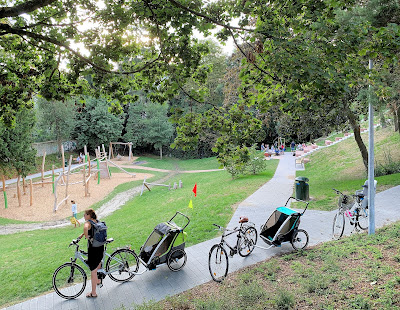 When looking at the photo of today, the allusion Turning Moats into Playgrounds would be appropriate. 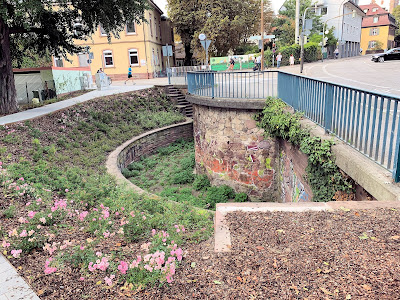 Not much is left of Vauban’s masterpiece. Here is the vestige of a tower covered partly by soil.


Stone Fall
End of August during the night, parts of the sill of the former Augustiner Church, now the core of Freiburg’s Augustiner Museum, fell on the sidewalk. Luckily nobody was hurt. 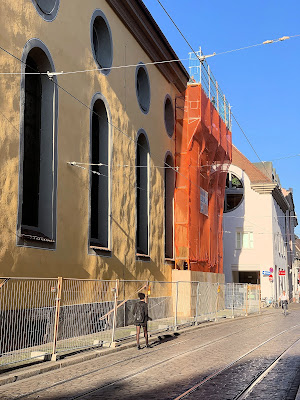 When Red Baron passed during the day, the whole sidewalk was fenced off. Well, it’s the glue again! Remember my blogs about the new university library? This time it was not just a small metal lamella but stones where the most massive part weighed 15 kg.

Nowadays, glues are used everywhere. However, in construction and building work, there should be a CAVEAT. When thermal movements are involved, and the layers of glue become brittle gravity takes over.

Those still hot days in Freiburg are now followed by cooler nights, so the differences in daily temperatures are more significant (CC). In the case of the glued sill thermal dilatation during the day is followed by thermal shrinking during the night stressing the glue. By the way, those lamellae at the windows of the university library are now riveted.

Warming Stripes for GLOBE
Last Friday Red Baron was on the train for his annual class reunion in a suburb of Hamburg. 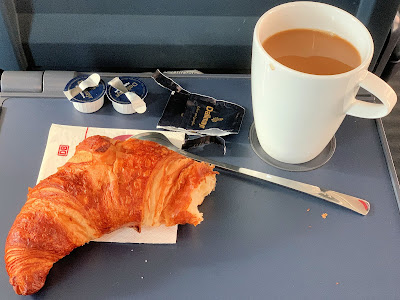 Remember the pot of coffee and Butterkuchen served on the ICE (Intercity-Express)? Unfortunately, the quality of the butter cake has degraded over the years. This time I just had a pot of coffee and a hearty bite of a Laugencroissant I had bought at the Freiburg station. The dictionary translates Laugencroissant as a delicate triangular croissant pastry with a slightly salty crust.

Because of my train ride, I missed the demonstrations of the Fridays for Future movement both in Freiburg and the Hanseatic city. Still, I am much concerned when thinking of my grandchildren. By placing CC in the text, I reminded you that we start to see the effects of climate change in our everyday life here in Freiburg.

While I was on the train, Freiburg saw its greatest crowd in history. More than 20,000, mostly young people demonstrated at the Square of the Old Synagogue for their future in a liveable climate. 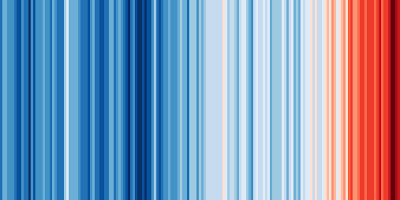 You possibly have seen the “Warming Stripes for GLOBE from 1850-2018” already.

Freiburg’s public transport company now reminds riders of their streetcars that it is nearly too late to stop climate change. They reproduced the Warming Stripes on one of their trams showing the dramatic rise in temperatures during our recent summers.

Meanwhile, our coalition government had entered into its longtime planned discussions at the chancellery in Berlin on what they called a climate package for Germany.

After 19 (!) hours of deliberations, parturient montes, nascetur ridiculus mus as the Latin poet Horace once wrote. Worn-out Angela Merkel went in front of the press and presented the compromise reached between the Christian and the Social Democrats.
*The mountain went into labor and delivered a ridiculous mouse, Horace (65 - 8 v.Chr.), Ars Poetica, Verse 139

The timid measures proposed are too small, they come too late.
Eingestellt von Red Baron um 15:07