One of my very first blogs (number five), dealt with the country estate of the noble family derer zu Andlau at Hugstetten near Freiburg.


Noblesse oblige, so the Andlaus had a noble house downtown too, a Palais on Herrenstraße.

Like many other historical buildings in Freiburg, the Andlau Palais was destroyed in the bombing raid on November 27, 1944. In the sixties, the plot was flattened, tared, and used as parking.

Frequently Freiburgers had asked why the ugly gap on Herrenstraße was not closed. In 2012 Freiburg's archdiocese wanted to fill the empty site when, in 2013, the disastrous Tabartz-van Elst affair made the headlines. As the Bishop of Limburg, he had used church money to build himself a palace residence. Immediately the Catholic Church scrutinized all building activities 2015, and the Freiburg project was put on ice.

Only in 2016, the Church took up the building activity again. 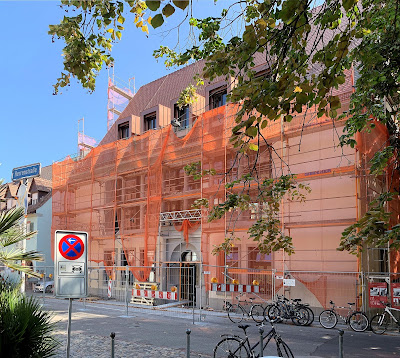 Red Baron had not visited the place for a long time. So suddenly last week he stood in front of the nearly finished building.

The new construction somehow recreates the former building. In particular, the historical portal made from sandstone, parts of it were salvaged during the excavation and were integrated into the facade of the new building.

The Church calls its new premises Münsterforum. The forum will house the so-called C-Punkt, a visitor and information center for Freiburg's minster church but also rooms "for various spiritual and musical events." A café-restaurant on the ground floor will be operated by the Archdiocese and Caritas. It will be run by people with and without disabilities.