In my history blogs, I frequently referred to the Habsburgs as the ever ruling German imperial family from 1273 to 1918. I covered the wars fought, their personal history, or bemoaned the last Habsburg.

Only lately, during my recent visits to Berlin, the other German ruling family, the Hohenzollern, came into focus. I walked through their city, Berlin, and visited their museums.

Some refer to the Hohenzollern as the Prussian dynasty, although initially, they originated from Württemberg.

I don’t intend to dig deeply into Prussian history, but I will mention King Frederick the Great. Some historians regard him as the enlightened prince while I call him a warmonger.

The latter quality certainly is true for Emperor William II. On the painting by Anton Werner seen at the Deutsches Historisches Museum note the 29-year-old uniform loving greenhorn silly looking in his red outfit while 73-old Bismarck slightly bending than standing is suffering in his posture as Red Baron.

Being back in Berlin for a family affair - another wedding - I concentrated in my "free" time on the Berlin Cathedral in memory of William I, the “founder” of the 2nd German Reich in 1871. 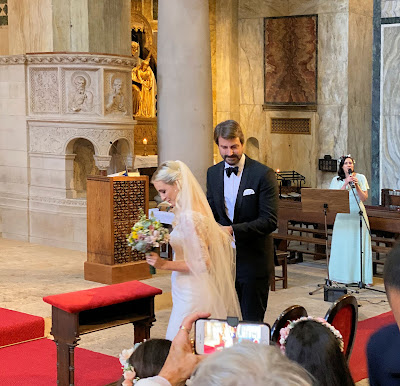 Have a glimpse of the bride and groom taking their seats for the ceremony not at the Dom but at Herz Jesu Kirche. Here we listened to a singer with the groom's brother playing the guitar.

A group of children was partly helping with the ceremony by holding stoup and rings. They nearly stole the show from the bridal couple.

The Berliner Dom was built in the 1880s as a Protestant counterbalance to the Catholic Cologne Cathedral (Kölner Dom).

And again, as an answer to the Vienna Imperial Crypt of the Habsburg, the Hohenzollern built their spacious imperial crypt below the Berliner Dom. 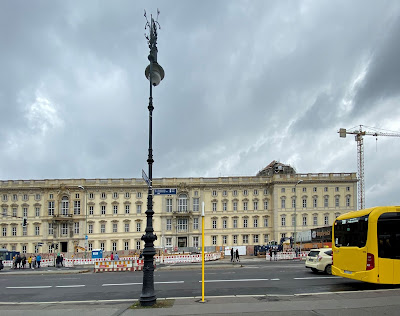 When I stepped out of the Dom, I admired the restored facade of the Berliner Stadtschloss, the future Humboldt Forum. I presented other views in a previous blog.
Eingestellt von Red Baron um 21:48