Last Thursday, Red Baron was at the theater. The Badische Zeitung (BZ) titled about the opening night: A great evening at the Theater Freiburg "The Seven Deadly Sins" and "Motherland". 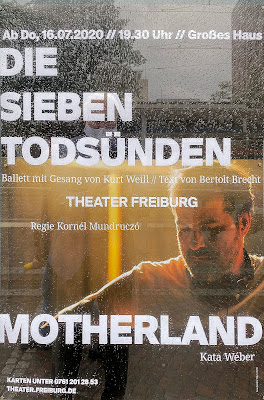 Well, I wasn't so sure. Did they mean the Corona opening of the theater or the premiere of two pieces?


While in exile in Paris in 1933, Kurt Weill and Berthold Brecht teamed together to write "The Seven Deadly Sins", a "ballet with singing". It premiered in the Théâtre des Champs-Élysées on June 7, 1933.

With the ballet not long enough to fill the evening, the Hungarian producer Kornél Mundruczó combined the premiere of "Motherland“ - a one-act play by Hungarian author Katá Weber - with "The Seven Deadly Sins."

The scene plays in a kind of doll's house. The BZ writes, "A bathroom with anthracite-colored tiles and a corner bath on the first floor, on the ground floor to the left a sizeable average kitchen, the living room a mixture of Swedish furniture store interior and inheritance: painstakingly acquired, modest wealth is reflected in it - and poverty lurks in every corner. So does sin."

It is also the desideratum of a "little house in Louisiana" that Brecht and Weill based their ballet on. During seven years, two sisters, Anna I and Anna II, travel in the US to earn money for their house, for themselves, and their family. On their joint tour, they are confronted with the seven evils: Sloth, pride, anger, gluttony, fornication, greed, envy. Finally, Anna I sings, "To try our luck - now we have made it.“

Interwoven is the story of "Motherland." A mother (it is Anna II) does everything so that her little daughter should win a beauty contest. The relationship between mother and daughter is slowly escalating in desolation: Mom wants to drag the little girl from beauty contest to top model contest, partly subliminal, partly with brutal pressure. The peak of this martyrdom is the scene where Anna II injects her daughter Botox.

The showdown comes in the one, but the final scene where the girl refuses to collaborate and mother Anna II enumerates all the expenses she has already invested in the project. She goes to the upper floor, sits down in the bathtub ... I was expecting the worse.

But then the closing words of the little girl came out clear and loud, addressing her mummy, "We will win, I promise.”

"Motherland" is stereotypical and banal, "The Seven Deadly Sins" are a short imitation of "Rise and Fall of the City of Mahagonny." Except for the excellent actors, it wasn't a great theatrical evening sitting together (?) with fellow spectators in a new normal configuration.
Eingestellt von Red Baron um 15:48