The name rings a bell. Wasn't there something called House of Saxe-Coburg and Gotha?

Coburg and Gotha are two cities in Germany. The first is located in Franconia, the second in Thuringia. Red Baron visited Gotha twice but only for a short time, so when I was in Erfurt, the city was just a 20 minutes train ride away. I decided to spend one day in Gotha while keeping my residence in Erfurt.

The Dukes of Saxe-Coburg are a branch line of the Wettiner, and their history is somewhat complicated. To make a long story short: The first duke of Saxe-Coburg and Gotha was Ernest I, who reigned from 1826 to 1844.

In the meantime, the marriage policy of the House turned out to be as efficient as that of the Habsburgs. As Wikipedia knows: Ernest's younger brother Léopold became King of the Belgians in 1831, and his descendants continue to serve as Belgian monarchs. Léopold's only daughter, Princess Charlotte of Belgium, was the consort of Maximilian I of Mexico, and she was known as Empress Carlota of Mexico in the 1860s. Ernest I's second son, Prince Albert (1819–1861), married Queen Victoria in 1840 and is the progenitor of the United Kingdom's royal family.

The actual founder of the British line Saxe-Coburg and Gotha is King Edward VII (1901–1910) the eldest son of Albert and Victoria. In 1917 Edward's son George V (1910–1936), while Britain was fighting Germany in the First World War, renamed the royal line the House of Windsor.

One arrives at Gotha by train at a station that is way out of the city center. While first railway stations were - and some are still - railhead termini fast train connection require through stations. The consequence is that these modern stations are mostly outside the city centers. Examples in Germany are Braunschweig, Heidelberg, Karlsruhe, and Gotha.

On foot, I arrived at the entrance to the old town. When facing the Rathaus (town hall), you look up to the Friedenstein castle. Sadly the whole area was a construction site. 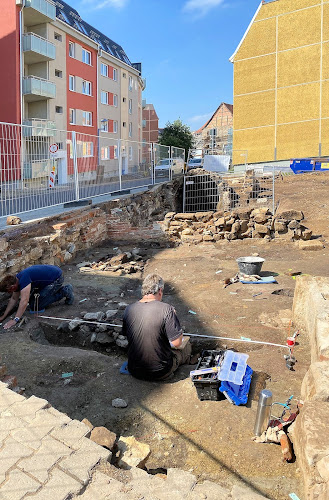 On walking up to Gotha castle, I even saw two city archeologists at work. 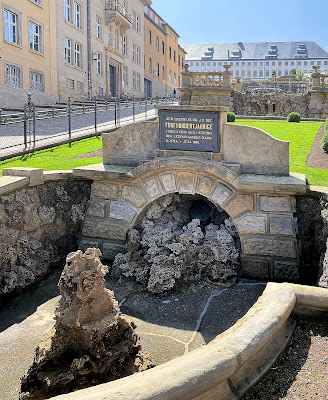 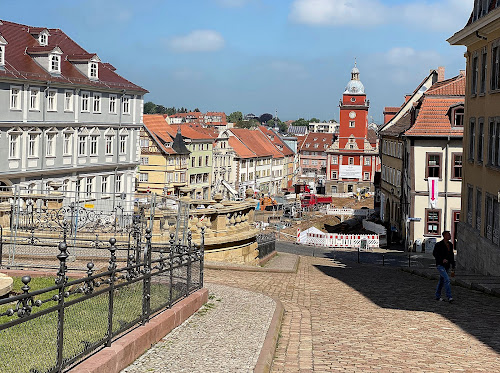 When I looked back at the Hauptmarkt. I noted the red tower of Gotha's town hall. The house in the sun on the right is the Lucas Cranach Haus, now a museum. Lucas Cranach the Elder (1472-1563) lived most of the time in Wittenberg, but he owned this house in Gotha.

Further up the hill, I approached the ducal castle from the left side following the red line on the city plan. Schloss Friedenstein was built in the years 1643 to 1554, the name was chosen allegorically honoring the end of the Thirty Years War and the Peace of Westphalia. 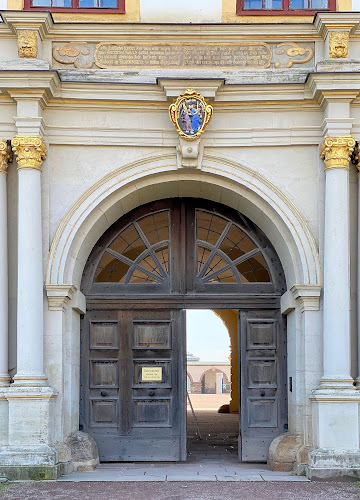 Above the main entrance the coat of arms of the House of Saxe-Coburg and Gotha greets the visitor. Schloss Friedenstein and its exhibitions were still closed to the public, so I walked through the gate hall and entered the vast courtyard. 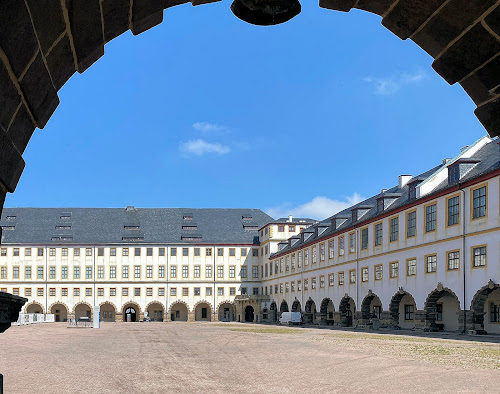 When looking back into the courtyard, I noticed how impressive the building is. 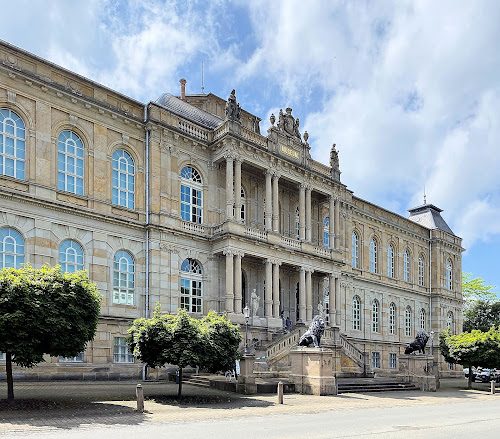 I followed the red line on the plan walked over the hill, and descended to the ducal museum that was built in the years 1864 to 1879. 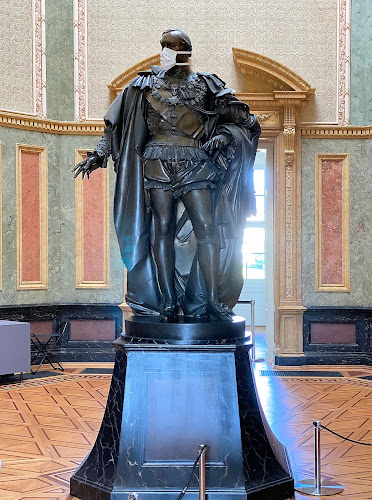 The wearing of mouth-nose covers was obligatory in the museum. The statue of the founder in the entrance rotunda, Duke Ernest II, was decorated accordingly.

Ernst II was the only German prince who took the March Revolution of 1848 seriously. In 1849 he decreed for Saxe-Coburg and Gotha the most progressive constitution in the German territories.

The quality of the paintings exhibited was not up to the impressive building although some original works of Lucas Cranach the Elder should be mentioned.

The explanation reads as follows: The painting illustrates Luther's teaching on the justification of every person alone before God. The tree of life and death divides the image into two halves: on the left, the sinful person who has acted against the law is driven into hell by death in the devil. On the right, the guilt-laden person who is being accompanied by John the Baptist is discovering the grace of God through Christ's suffering and death.

I walked through the ducal park to the station and took a train back to Erfurt in the early afternoon.
Eingestellt von Red Baron um 22:15