Here is some news from Freiburg in the form of splinters. 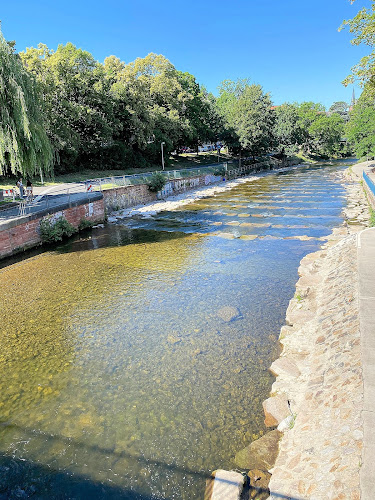 A recent photo of the newly built fish ladder. We had a warm winter, a summerly spring, and only a little rain. It's no wonder that the Dreisam River is practically dry. The months of July and August are announced to be hot, with temperatures well above 30°C. We do not expect much water coming from the skies. Will there be any water in the Dreisam at the end of summer?


On Monday 22, many buildings in Germany were glowing red.

While in some sectors the economy it's taking up the pace, all those who earn their money depending on mass events (theaters, concerts in particular) are still out of work. The Freiburg theater will open on July 18, with a ballet Die sieben Todsünden (The Seven Deadly Sins) by Berthold Brecht and Kurt Weill. Red Baron will attend and report.

The red illumination is meant to be a reminder and a protest at the same time. The future is dim for mass events as long as we do not have a vaccination.


Last week the Freiburg Wikipedia Stammtisch met for the first time since March. The new normal consisted of only four people sitting in the vast garden of a Greek restaurant enjoying Gyros. 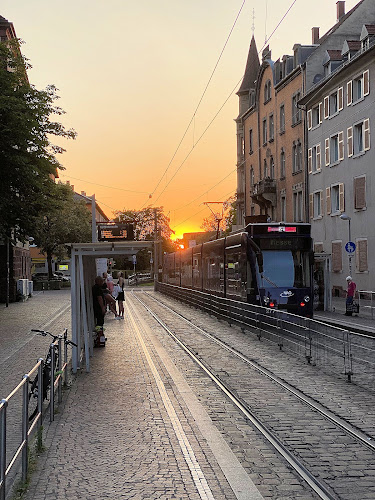 On my way home, it was already late, but in waiting for my streetcar, I noted this eerie sunset. While tram 4 had just left ... 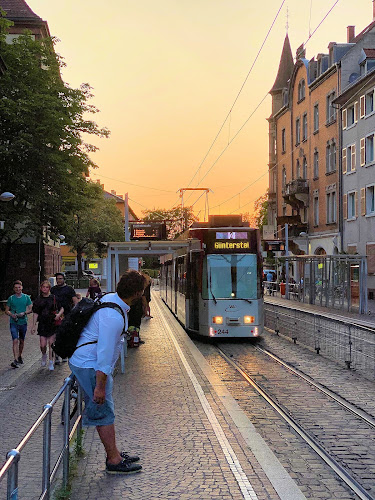 ... number 2 is arriving one minute later to take me home


The reported statue destructions in the course of the BLM demonstrations in our sister city Madison make no sense. Colonel Hans Christian Heg fought in the Union Army against the Confederates and fell in the Civil War.

On the other hand, discussions about the fate of Alban Stolz's monument - certainly triggered by the iconoclasm in the States - suddenly entered into a new phase. While the Catholic Church would like to have the "anti-Semite" bust removed ASAP, the Monument Regulatory Authority has cast its veto: The removal of the statue would destroy the global view of the square in front of Konviktkirche.

Now the city intervened, and Mayor Ulrich von Kirchbach, responsible for Freiburg's social and cultural affairs, demanded the removal of the bust. It is now very likely that the final decision on Stolz's fate will be taken at the level of Baden-Württemberg's state government.

Red Baron reported about the success of the popular vote to create a new suburb called Dietenbach in February 2019.

Despite the Corona crisis, the planning of Freiburg's new quarter Dietenbach goes ahead, although not all plots of land still used for agriculture have been acquired. The administration has informed the municipal council about the preparation for the development of Dietenbach. The aim of the framework plan presented is to create a suburb with a climate-neutral energy supply, an environmentally-friendly mobility concept, and a barrier-free living space. There will be a total of four quarters with their own neighborhood squares and municipal childcare facilities. The city council will vote on the framework plan on December 8.

This is not a Freiburg splinter but rather a thorn in the flesh of most citizens (Red Baron reported).

The Fessenheim nuclear plant opened in 1977 and in 2020 was already three years over its projected 40-year life span. Since its construction, it had always been a target for anti-nuclear campaigners in Freiburg, in particular after the catastrophic meltdown at Fukushima in Japan in 2011.

Finally, France's oldest nuclear power plant shut down on Tuesday, June 30, to the delight of environmental activists but stoking worry for the local economy.

Wat dem einen sin Uhl, ist dem andern sin Nachtigall (One man's meat is another man's poison). "We hope, above all, to be the last victims of this witch hunt against nuclear energy," Fessenheim union representative Anne Laszlo said ahead of the closure, which will see about 150 families depart the tiny Alsatian community of 2,500 inhabitants this summer.

Yesterday evening we had our first Stammtisch following the Corona-Beschränkungen (restrictions) of public life in the middle of March.

The Freiburg-Madison Gesellschaft had invited its members to the Greiffenegg-Schlössle or rather to the Biergarten. Recently this so-called Kastaniengarten had been counted among the ten most beautiful beer gardens in Germany.

Auswandererlieder or the Sound of Freedom

Here is the draft poster of an event our Committee member Herbert Schiffels has organized within the program of Freiburg's 900th anniversary. In the 19th century, many Germans left their country due to political or social-economic reasons. They sang songs of wanderlust, homesickness, and social criticism. These old texts are highly topical during the present refugee crises.

With many events of Freiburg's 900th anniversary canceled or postponed the Sound of Freedom would be one highlight at the end of October.

Around 10 p.m., the party rose from the table.  On my way home I took some photos: