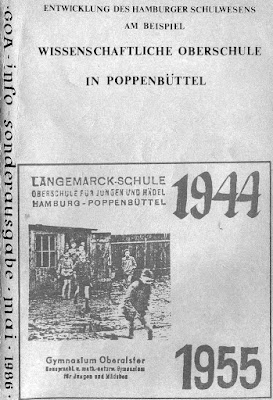 The spirit of the shacks is the tenor of a booklet with the title: Die Entwicklung des Hamburger Schulwesens nach dem 2. Weltkrieg am Beispiel der wissenschaftlichen Oberschule Poppenbüttel 1944-1955 (On the development of Hamburg's school system after World War II, taking as an example, the Poppenbüttel scientific high school 1944-1955).

This summer, a big event was planned at my Oberschule in Poppenbüttel - now called Gymnasium Oberalster (GOA) - to celebrate its 75th anniversary. My brother who graduated from the GOA seven years later wanted to come too, but Corona killed it all.

Instead, he sent me the booklet about the founding years of our school, a publication I had not been aware of. It turned out to be a fascinating reading since I started the Oberschule für Jungen and Mädchen in Poppenbüttel (High School for Boys and Girls) in the suburb of Hamburg in fall 1946.

The history of this school is somewhat complicated, for it started already on September 11, 1944, during the Third Reich as "Langemarck*-Schule, Oberschule für Jungen und Mädel. "Note Mädel instead of Mädchen, both are diminutive forms of Magd, in the Middle Ages and the Bible the name for a young, virgin woman. Mädel is the folkish-national diminutive, frowned upon today.
*Read about the Langemarck myth below

Following Germany`s defeat in May 1945 the school was refounded on October 3, 1945 as „Wissenschaftliche Oberschule für Jungen und Mädchen in Poppenbüttel.“ 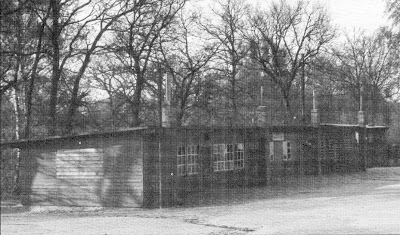 In 1946 my high school consisted of a wooden shack with two classrooms heated by wood-fired round iron stoves. To feed them, we students were welcome to contribute a log of firewood or a briquet during the cold winter of 1946/47. Although the stove was glowing red hot, the poorly insulated wooden shack - called Baracke in German - remained cold. We were writing on our pieces of paper  - we had no notebooks - with gloved hands. 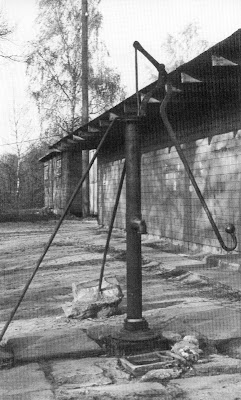 As a water supply, we had one water pump with a handle and as toilets, two outhouse pit latrines, one for the girls and one for the boys, the excrements flowing downhill into the Alster River below.

On the other hands, the Barracke was beautifully located on the steep bank above the upper Alster River, although reaching the school on foot or by bike, was a challenge at times.

In those days, Northern Germany was not yet bedeviled by a draught but notorious for its cold and continuous rain called Hamburger Schmuddelwetter (dirty or foul weather). My chemistry teacher, a lost poet, wrote:

One classmate, my friend Gerd, contributed the following lines to the booklet, "I don't remember the misery of our situation, and that was because we didn't feel miserable. We didn't feel any different than others. That was the familiar feeling of life at that time, and when we heard our parents rave about how beautiful it had been before the war, it didn't matter to us. For us, cold and hunger were the normal states of life."
Subsequently, the late Gerd called the spell that makes us still come together for our yearly class reunions, the Barackengeist.
And here follows the first paragraph of a letter another classmate wrote in 1955, one year after our Abitur (graduation), his/her? memory not yet transfigured by time, "When I think of my school days, the first thing that comes to my mind are the early post-war years, when we sat in the cold Baracken or huddled around the soup buckets when we all had nothing and were, therefore, all equal. At that time, a community spirit developed that could still be felt even in the upper classes, when the social differences had long since reappeared and when we were already sitting at the freshly painted tables of the new school building. After the war, comradeship, consideration of, and adaptation to the neighbor were not only manners but necessities of life."

In those hunger days, hot school lunches were a necessity for all students and teachers. On January 23, 1946, the New Hamburg Press wrote, "On five days a week students and teachers will be served a thick hot soup, as there are soy soup, pea soup, bean soup, and cabbage stew. On the other two days, milk soups of all kinds will be handed out, i.e., oat flakes or noodles in milk and chocolate soup."

After the buckets filled with hot soup had been unloaded from a truck at the road bridge over the Alster River we, the students, who sometimes had to wait for an extended period of time for the delivery, carried the containers the 600 m distance up from the Alster valley to the school.

We brought our pots from home - often the fathers' mess tin - and during the breaks crowded around the buckets with growling stomachs. Once we had received our half-liter of soup, we gobbled it down as quickly as possible because the motto was: "First come, first served." If there was anything left in the soup container, the first and fastest got the coveted seconds.

At Christmas, we sometimes received rations packs the American armed forces had discarded. These packs not only contained chocolate but often also canned peanuts we had never seen before and - surprisingly for students - portions of Nescafé powder in aluminum foils.

And here follows the second paragraph of the letter my former classmate wrote in 1955. "At that time after the war, we also learned that even with the simplest, most primitive means something can be achieved if the will and love for the cause are there. This probably also connected us students with the teachers, for we knew how tenaciously and persistently they wrested every piece of gymnastics equipment or physics apparatus and every map of the Hamburg school authorities and how they negotiated with them about the construction of a new school building."

The new building actually moved the school from Poppenbüttel to the neighboring suburb Sasel so that the name high school for boys and girls in Poppenbüttel was no longer correct. The final name of the school became Gymnasium Oberalster (GOA), honoring its previous location on the banks of the upper Alster River.

"West of Langemarck (a place in Belgian Flanders), young regiments, chanting 'Deutschland, Deutschland über alles*,' stormed against the first line of enemy positions and took them. About 2000 men of French line infantry and 6 machine guns were captured," the Supreme Army Command (OHL) announced on November 11, 1914, the day after the battle. It was fake news for "above all," these young men didn't sing.
*Germany, Germany, above all
In its communiqué, the supreme command had concealed the fact that more than 2000 German soldiers had died in the defensive fire of the French and British during the attack. The OHL tried to reinterpret the militarily senseless operation into a glorious victory.
Langemarck developed into one of the most popular German myths in the first half of the 20th century. Students destined to academic careers had stormed together with "common" soldiers in the front line against the enemy. The reckless burning of so many young people was glorified as the "sacrifice of German youth." The attack was praised as a heroic act and a symbol of an alleged German "Volksgemeinschaft."
No wonder that the National Socialists gladly made use of this story and appropriated it for their own purposes like naming a school in Poppenbüttel Langemarck.
Eingestellt von Red Baron um 22:01