The German people shared the excitement of watching the outcome of the presidential election and were deprived of their nights of sleep. The "Is he gone?" felt like the Groundhog Day movie in Punxsutawney, Pennsylvania (sic!).
Now on Saturday, November 7, at 5:25 p. m. CET CNN made the call with Joe Biden leading in four battle states and counting.
This means that POTUS should start packing although there is some fear that the National Guard must be called in to escort him out of the White House. Let that nightmare be fake.  A Biden spokesman confirmed that if Biden wins and Trump refuses to concede, “The United States government is perfectly capable of escorting trespassers out of the White House.” 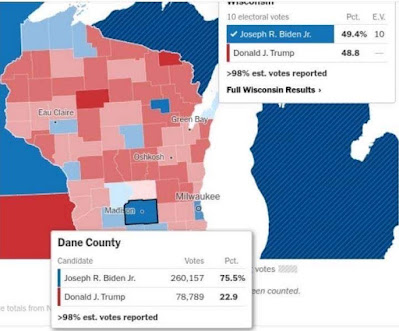 For me, the real winners of the election campaign are the people of Dane County, a square dark blue island in a reddish sea. The result for the State of Wisconsin was close, but the votes of Madison and its surroundings flipped it. This is why Stephen Colbert "nobled" the people of Wisconsin as blue Cheeseheads.

When one of my correspondents in Madison, former AYF resident director professor James Steakley sent me the above graphic on Thursday morning I immediately posted it on the Freiburg-Madison-Gesellschaft Facebook site. It went viral with more than 300 visits by Friday morning.
And even better, the local newspaper Badische Zeitung (BZ) took up the post the same morning:

On Saturday, Florian Kech titled his weekly satirical column in the BZ," Biden ist uns was schuldig (Biden Owes Us Something).”
"As we know by now: last not least Joe Biden won the important swing-state Wisconsin due to the votes (75%) in our partner city Madison. Unbiased election observers from Martin Horn's Oval Office at Freiburg’s townhall claim that this result is clearly linked to our city’s positive influence. Hence, it would be neither surprising nor too much to ask that in one of his first official acts, our man in the White House moves the U.S. Embassy from Berlin's Brandenburg Gate to Freiburg's St. Martin's Gate."
While in the States the words healing and bridging trenches dominate the news here in Germany, commentators keep harping on the theme of how the Good-Bye president has damaged democracy in the US. 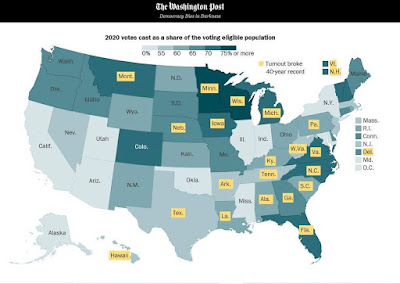 The people of Wisconsin have shown that the rule by and of the people still works in their State. Just look at the voter turnout. Judging from the depth of the color. Who is the first MN or WI?
Eingestellt von Red Baron um 17:57