This morning the number of daily Corona infections in Germany reached the 20,000 mark. This means that intensive care units are approaching their limits, not for hospital beds or ventilators but for experienced medical personnel.
Last Wednesday, Chancellor Angela Merkel video conferenced with the governors of the 16 states. “It is clear that we must act, and act now to prevent a national health crisis,” she said. The measures agreed upon rather rapidly aim to ease the country’s health system strain, where hospitals have seen the number of patients double in the past 10 days.
New restrictions in Germany will be valid throughout November. The primary goal is to reduce the number of contacts by a calculated 75%, thereby flattening the curve again. The temporary restrictions limit the number of people allowed to meet up in public areas to ten provided they belong to two families only. The measures are regarded as a breaker for the second Corona wave.

While hotels are off-limits for private stays (no holidays) and restaurants and bars are closed, supermarkets, stores, schools, and daycare centers will remain open. The German media labeled the restrictions, which are less comprehensive than those imposed in the spring, when schools and most businesses were forced to close too as “lockdown light.”

The virus's rapid spread should be brought to a halt before the coming Christmas holidays without bringing the economy to a complete standstill. Therefore, the government will compensate small- and mid-sized businesses affected by the monthlong closures with up to 75% of losses, i.e., the financial aid for affected businesses will be worth up to 10 billion taken out of a fund of 25 billion euros.
The restrictions also mean that we can no longer meet at our monthly Freiburg-Madison Stammtisch. Red Baron will miss the  Kieser Training in particular.


In the meantime, the fourfold AHAL developed into a fivefold AHAAL. The additional "A" stands for "app," Germany's Corona tracing application.
20,3 million Corona apps working on mobile phones (iOS and Android) had been downloaded by October 23, representing 24,4% of the German population. According to a study at Oxford University, the "app" is already useful at a 15% penetration; at 60%, the pandemic could be stopped. 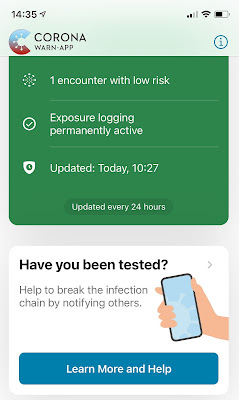 The cryptic green message on my iPhone possibly means that I had come near to a person that had been tested negative on Corona.
Tomorrow, I shall visit the Minster market and eat my last Bretzel and drink my ultimate small Weizenbier vom Fass (wheat beer on tap) to the health of all my readers before Toni‘s place will be closed on Monday. 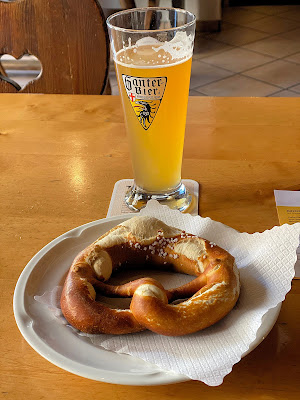 P.S.: Promises made, promises kept. On Halloween morning at Toni's on Münsterplatz at 11h30. But when I had finished ... 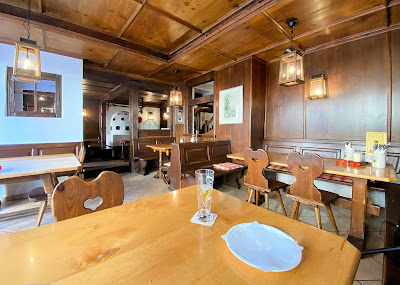 ... an old Frank Sinatra tune came to my mind, "The tables are empty, the floor is deserted ..." and taking the lyrics further, "It wasn't my first lesson in learning the blues."
Too sad ...
Eingestellt von Red Baron um 19:01