During the recent election campaign, Red Baron learned about PoC and the Thin Blue Line flag. Until recently, I only knew about a red line that should not be transgressed.
Looking for an explanation of the blue color, I found that the thin blue line stands for the borderline between chaos and order reflecting the blue uniforms of law enforcement.

In ”Letters from an American,” Heather Cox Richardson reported, ”On October 24 in Waukesha, Wisconsin, Trump held a rally, not in front of an American flag, but in front of the Thin Blue Line flag, a black and white American flag, with a blue stripe running across its middle. The creator of the new flag, Andrew Jacob insists, “the flag has no association with racism, hatred, bigotry…. It’s a flag to show support for law enforcement—no politics involved.”

”But white supremacists waved the flag at the 2017 ‘Unite the Right' Rally in Charlottesville, Virginia, and it has come to symbolize opposition to the Black Lives Matter movement. Its adherents talk about ’socialism’ and ‘law & order’ and ‘illegals.’ According to Jacob, ‘The black above represents citizens… and the black below represents criminals.’”

”Flags matter. They are the tangible symbol of a people united for a cause.”
Here are two other examples of flags that matter: 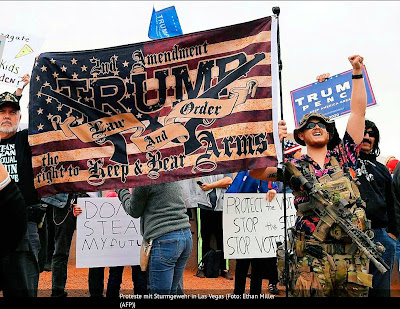 Why is he carrying an assault rifle? Isn’t a six-shooter sufficient for self-defense? 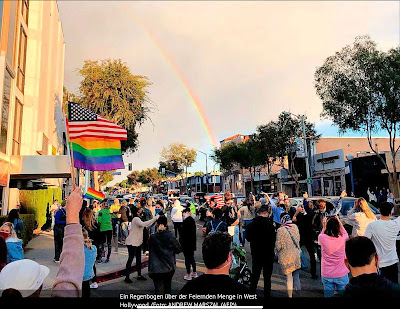 And God said to Noah (Genesis 9:14-16), "Whenever I bring a cloud over the earth, then the rainbow will appear in the cloud. And I will certainly remember my covenant that I made between me and you [Noah] and every living creature of every kind, and never again will the waters become a flood to destroy all flesh. And the rainbow will occur in the cloud, and I will certainly see it and remember the everlasting covenant between God and every living creature of every kind on the earth."
Due to our past, we Germans have an ambivalent relationship with flags. Initially, already the order of the colors on the bunting posed a problem, then the use of flags in wars became predominant, and eventually, a break with tradition was not successful.

During a sleepless night in 1900, the Bohemian-Austrian poet Rainer Maria Rilke wrote a masterpiece about a flag.
The Lay of the Love and Death of Cornet Christoph Rilke von Langnau
In the battles fighting the Turks on the Balkan, the eighteen-year-old Cornet should be carrying the flag in front of his comrades. But one day, he is late at the roll call.

And with sly breath stammer horns in the yard:
Gather, gather!
And trembling drums.
But the flag is not there.

But the flag is not there.
Calls: Cornet!
Raging horses, prayers, shouting,
Curses: Cornet!
Iron to iron, command, and signal;
Silence: Cornet!
And once more: Cornet!

And out with the roaring cavalry.
But the flag is not there ...

Eventually, Christopher Rilke von Langnau finds a horse but not his helmet ...

And then the flag starts to shine, stands out, becomes big and red... their flag burns in the middle of the enemy, while they chase after it.

Christopher Rilke von Langnau is deep in the enemy, all alone. Horror has made a circular space around him, and he is holding, in the middle of it, below his flag that is slowly blazing.

Slowly, almost thoughtfully, he looks around him. There are a lot of strange, colorful things in front of him. Gardens - he thinks and smiles. But he feels that eyes hold him, and he recognizes men and knows that they are the pagan dogs - and throws his horse right into them.

But, as the men behind him are closing up, there are gardens again, and the sixteen round sabers that leap at him, beam after beam, are a fest, a laughing water art …


Red Baron learned that PoC stands for a "Person of Color"; sometimes BPoC (Blacks and People of Color) is used, more rarely BIPoC (Black, Indigenous and People of Color), emphasizing blacks and indigenous people. Here in Germany, we don’t know these abbreviations although, swashing over from the States, racist topics are currently discussed.

Still one has to distinguish between two debates in Germany. The dispute over whether Berlin's Mohrenstrasse should be renamed is a debate about ”racism.”. Mohr is a deeply colonialist and racist term, say its proponents, while the opponents of a renaming consider it nonsensical and oblivious to history. Read more background information in my previous blog.

The other debate in Germany is devoted to "race," which is to be removed as a term from legal texts because its concept is contaminated by National Socialism and is unscientific too.

In the debate on the elimination of the term "race" from Article 3 of Germany’s Basic Law, the Hamburger Senat, i. a., the government of the state of Hamburg, proposes a solution: "Race" is to be replaced by the word "racist." The Senat wants to introduce this proposal to the Bundesrat, Germany's upper house (corresponding to the US Senate). The wording of Article 3 would then read, “No one may be discriminated against or favored because of his or her gender, ancestry, language, home, and origin, faith, religious or political beliefs or racial bias.

Isn’t ”No one may be discriminated against or favored because of his or her race, gender, etc." less verschwurbelt (convoluted) than the new text?

These developments don’t surprise the emeritus linguist Rudi Keller. He considers it hopeless to solve the deeply rooted problem of racism linguistically, "Racism does not disappear by introducing new words. After all, this does not invent a new category, but merely a new term for one and the same attitude. Anti-Semitism can’t be eradicated by ‘fiddling with language’.” 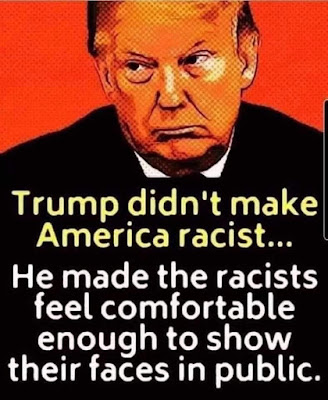 Racism will always exist, but there is an important aspect when racism becomes salonfähig*, i.e., you can openly talk about and live your racism, being made socially acceptable.
*as in Nazi Germany
Eingestellt von Red Baron um 09:59