It's Raining on Wittenberg

Our group saw the town of Luther's postings, Wittenberg, in pouring rain. Red Baron had visited the place on a bicycle tour in 2004.

On our way from Schlosskirche to Marienkirche (in the background) we walked along newly created Bächle (brooklets) that rather look like brooks to Freiburgers. 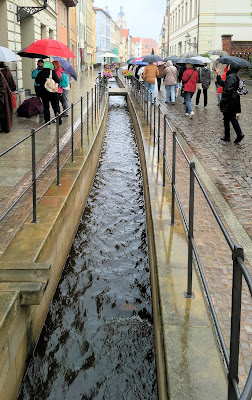 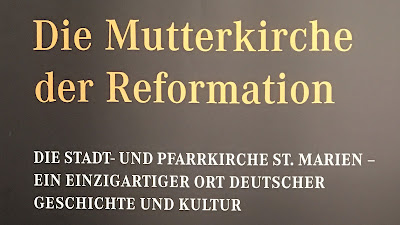 We arrived early at Marienkirche and had to wait for the visit for a camera crew was interviewing a lady in the chancel. 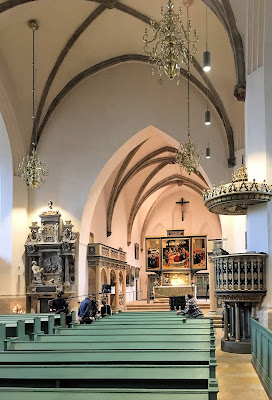 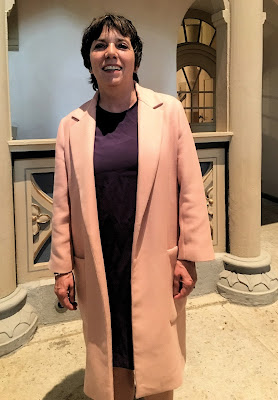 It was a surprise to meet former bishop Margot Käßmann, now ambassador of next year's 500th anniversary of Luther posting his theses, who generously allowed me to take her photo. I told her that when watching her from the distance talking to the television people my impression had been that of a young lady. She - mother of four daughters - said with a smile that she was already a grandmother. I only stammered: I am a grandfather too. She answered with another smile. What a charming ambassador!

Next stop was at the Lutherhaus. Knowing well the exhibition inside Luther's house I instead opted to visit the Melanchthonhaus nearby.

Without Magister Philipp Schwartzerdt (Melanchthon) Luther would not have been able to read Erasmus' Greek "Urtext" properly that served for the translation of the New Testament into German. Melanchthon's house and the exhibition were somehow deceiving with mostly empty rooms filled with artist-inspired furniture surrogates.

However, some of the original documents exposed behind double glass protection were interesting.

Back at the Lutherhaus I had just time to walk around catching some photos.