No Bridge over Troubled Water?

The renaming of street names with a loaded past is not the only topic that presently occupies Freiburg's citizens. As you probably already know, Freiburg was once divided into two parts separated by a traffic axis, the Karl-von-Rotteck-Ring. Following the Ring's closure to car traffic in 2014, a pedestrian zone is under construction, "unifying" the two parts. The only traffic between the university and the theater will be a new streetcar line. A real campus will be created between the new university library and the traditional quadrangles with lecture halls. 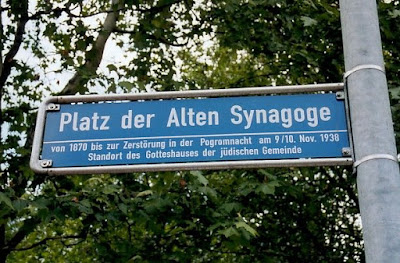 On the artist's view, you see the Square of the Old Synagogue, a wide surface covered with granite plates that have already caused a discussion about their heat retention on hot summer days. People have also criticized the absence of vegetation. Well, a few trees will be planted.

A shallow water basin will mark the layout of the "old" synagogue that the Nazis burned down during the Reichskristallnacht on November 10, 1938. Later they removed all stones.

Until recently, a commemorative plaque reminded passersby of the barbaric act. Freiburg's Jewish Community greatly appreciates the planned integration of the bronze plaque into the new commemorative water basin.

Looking at an old photo, you notice that the synagogue was built on a small hill in 1870. The planning staff of the new pedestrian zone was confident that the Nazis had not only removed the rubble of the synagogue but the basement of the building and the surrounding soil too. They confirmed their assumption by probing the site with ultrasound. When the construction crew eventually dug some holes to house the pumping station for the water basin, they only found relics of Freiburg's medieval fortifications. It came as a great surprise when they suddenly unearthed some stones belonging to the old synagogue.

All construction activity in the area stopped. The Jewish Community signaled that under no circumstances should the stones be touched. In fact, it would have been easy to cover those stones with soil, as it is planned with the medieval remains, but a little wall turned out to be 40 centimeters too high, protruding into the planned water basin.

While visiting the scene Irena Katz, chairwoman of Freiburg's Jewish Community, set her handbag on the relics of the old synagogue but took it away immediately after realizing what she had done. She shook her head skeptically and said, "A poll among members of the Jewish Community has shown that more than 90% of the members are against removing stones."

In the meantime, more than 90% of the city council members support Mayor Dieter Salomon, who strongly endorses the position of the archeological team.

Will the two parties reach an agreement? Freiburg's city council will decide on October 29, and they admit there is no plan B.


P.S. Abgesang (swan song): Eventually, there was no bridge. In vain, a vigil of about 30 people demanded that the old synagogue be rebuilt to serve as a documentation center or at least the unearthed remains be conserved and made visible.  Although the Jewish Community had initially endorsed the water basin concept and despite a constructive debate, Irena Katz called the city council's decision to stick to the original plans "rigid." Her hope now is that work at the site will not start before November 9th, the 78th anniversary of the Reichspogromnacht (Kristallnacht).
*
Eingestellt von Red Baron um 00:19