Are Schools Too Dumb for Our Kids?

This was the provocative title of a lecture at Freiburg's university in the series Education Today. The speaker was Jürgen Kaube, co-editor of Germany’s renowned newspaper Frankfurter Allgemeine.

Everybody knows and talks about education because we all went to school, have our personal experience, ideas, proposals, and criticism.

Indeed, people were always dissatisfied with education like Professor Higgins when judging on Eliza Doolittle's quality of speech,


”This is what the British population,
Calls an elementary education.”

Before the musical ”My Fair Lady” was even conceived, Red Baron learned about British education. We kids were simply amused when our English teacher told us about the importance of the three ”Rs” in the UK, ”Reading, ’riting, ’rithmatic.” We thought the alliterated ”Rs” were just funny. 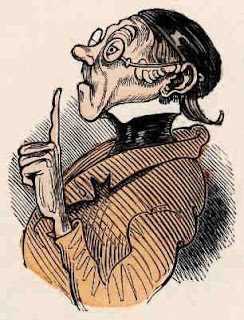 Dr. Kaube started his lecture with a laconic remark, „Most people forget most of it,” referring to knowledge acquired in school.

He continued insisting that nothing has changed concerning priorities. Primary education should concentrate on Kulturtechniken (cultural techniques), i.e., nothing else than the three fundamental ”Rs.”

He warned: Do not try to treat kids as adults conveying sciences to them but rather strengthen their abilities. What is the use of asking children to write about the African elephant when they don't even know how to spell elephant? Don’t teach ”early English” in the third grade when children do not master their German mother tongue.

The second aim of schooling is to make children think. On which one of my teachers used to say when a classmate started his answer with, ”I think*...”, ”You should not think. Leave the thinking to the horses. They have bigger brains than you. Reflect!”
*Frequently understood in German and deliberately interpreted here in the sense of, ”I think I’ll have another beer.”

Although the art of reflection requires some knowledge, it needs above all basic understanding, e.g., that of cause and effect.

There is a dilemma. While today's parents propose a whole catalog of skills schools should convey to their children, the latter instead demand that schooling must not disturb. 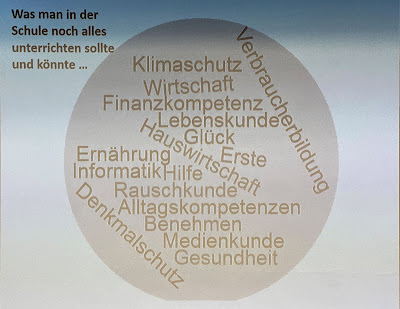 Two weeks before in his lecture,” What is good education today?” the president of the German Teachers Association, Heinz-Peter Meidinger, showed the above slide, "What one still should and could teach in school."

I spare you the translation into English because you may have your own wish list. I only ask the question,” What is the role of the Elternhaus (parental care) in all this?”
Eingestellt von Red Baron um 17:45