In a previous blog, I presented the following mysterious poster: 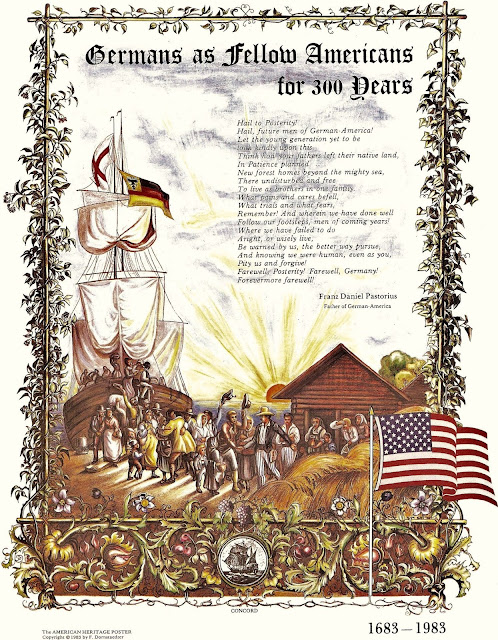 Near the end of my deliberations, I wrote: Unfortunately, the poster does not show a historical event. Nevertheless, it makes me dream about some Freiburgers who - following the occupation of their city on July 7, 1849, by Prussian troops - fled and eventually embarked for the States on a ship of the Federal Navy flying the Federal Insignia and Freiburg's flag with St. George's Cross too.

What I wrote was fake news for, fortunately, the poster shows a historical moment of German-American history.

The poster was printed in 1983, the year when both countries celebrated the 300th anniversary of the German Mayflower.

The galleon you see on the poster was the Concord that set sail in Rotterdam on July 6, 1683, under the command of Captain William Jeffries and arrived at Philadelphia happily on October 6. Onboard there were 13 families from Krefeld on the Lower Rhine of Quaker and Mennonite faiths. Initially, the families probably moved to Dutch-controlled Krefeld due to religious persecution in Germany. They continued from there to America, where this first significant group of German settlers founded Germantown.

Here is an additional text from Wikipedia describing what happened in Germantown a few years later: In 1688, five years after its founding, Germantown became the birthplace of the anti-slavery movement in America. Pastorius, Gerret Hendericks, Derick Updegraeff, and Abraham Updengraef gathered at Thones Kunders's house and wrote a two-page condemnation of slavery and sent it to the governing bodies of their Quaker church, the Society of Friends. The petition was mainly based upon the Bible's Golden Rule, "Do unto others as you would have them do unto you." Though the Quaker establishment took no immediate action, the 1688 Germantown Quaker Petition Against Slavery was a clear and forceful argument against slavery and initiated the process of banning slavery in the Society of Friends (1776) and Pennsylvania (1780).

Francis Daniel Pastorius is also the author of the poem printed on the poster.

In 1983 the American and the German postal services jointly issued commemorative stamps showing the Concord on the high seas. As on the poster, the ship has two flags: St.George's Cross indicates that Concord was an English ship. As far as the German flag is concerned, the anachronism is obvious.

The flag flown is that of the German navy of 1848, showing black-red-gold and the imperial eagle. Already in 1853, the German navy was dissolved due to financial problems. There was a lack of interest by the mostly inner-German states.

In the meantime, I found an original poster on American eBay and ordered it. This does, however, not solve the problem of the copyright that we need when the Freiburg-Madison-Gesellschaft would like to use it for its contribution "Auswandererlieder" to the Freiburg 2020 jubilee. Can anyone of my readers locate the author of the poster,  F. Dornstaedter?
Eingestellt von Red Baron um 22:55