Maximilianus, the Art of the Emperor 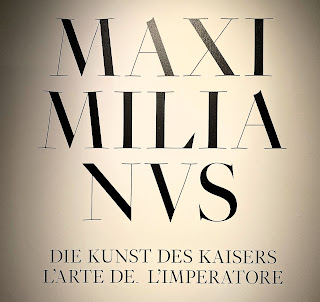 On the occasion of Maximilian's 500th death anniversary in 2019, Freiburg's Alemannisches Institute had organized a three-day excursion to the exhibition with the above title at Tirol Castle in South Tyrol followed by a visit of Innsbruck where the emperor’s (empty) tomb is located.


The exhibition at Tirol Castle showed original graphics, paintings, and printings glorifying the last knight as he was called for his love for knight tournaments.
During all his life, Maximilian strived in building up his memory for the posterity, ”Wer ime (= sich) im leben kain gedechtnus macht, der hat nach seinem tod kain gedechtnus, und demselben menschen wird mit dem glockendon vergessen. (Who does not look after his memory in life has no memory after his death, and the same person is forgotten with the bell tone)." These are the final words of his autobiographic work Weißkunig (White King).

Here follows Maximilian's logical insight, "Darum wird das Geld, das ich auf Gedächtnis ausgebe, nicht verloren (Therefore the money that I spend on memory is not lost)." This is a bold statement considering that Maximilian was bankrupt during his whole life. Only loans by the Fugger clan kept him aloft who, in turn, got hold of Maximilian's assets.

When Maximilian died at Wels Castle in 1519, there was not even enough money to finance his funeral, as the abundant Tyrolean silver and copper mines were pledged to the Fuggers: Everything that carried money has been transferred. Only borrowed money enabled a modest burial in Wiener Neustadt.


Maximilian had planned to decorate his tomb with 40 statues cast in bronze, but only 28 were finished. The figure captions below are the copied inscriptions at the base of those statues.

The Habsburgs started off when, in 1273 Rudolf I was elected German king. In 1291 his son Albrecht (Albert) followed. He was assassinated in 1298, the year when the House of Luxemburg took over providing the German kings. But when Emperor Sigismund, the last male member of the House of Luxembourg, died, he left only one daughter. She was married to a Habsburg, Albert, who became German King Albrecht II from 1438 to 1439. In 1440 the electors chose as successor Albert's cousin Frederick - and Maximilian's father - who ruled until 1493. Contrary to Maximilian Frederick III was called the Reichserzschlafmütze (arch-sleepyhead of the empire)

They write that Maximilian had truly loved his first wife, Maria of Burgundy and that he married his second wife, Bianca Sforza, because of her dowry of 400,000 ducats.

Still, Maximilian kept incurring debts also during the imperial diet held in Freiburg in 1498. When Maximilian took leave from the city, he left Bianca behind as a pledge. She had to stay in Freiburg for some time until at least part of Maximilian's debts incurred during the Reichstag had been paid. Twenty years later, financial claims of over 20,000 guilders were still outstanding. Read more about Maximilian and his love for Freiburg in German.

Ruling Burgundy acquired by marriage was important for the Habsburgs, also given French claims.

Duke Philip the Good had led Burgundy to bloom, but his son Charles the Bold wanted even more. So he went to war against the rest of the world. On 2 March 1476, Charles lost his hat in the Battle of Grausen (Grandson) against the Swiss Confederates and lost his estate in the same year on 22 June at Murten (Morat) against an alliance of Swiss, Lorraine, and Austrian troops.

That's not all, because, in the following year in one last show of strength when the Duke put all his eggs in one basket, he eventually lost his blood in the Battle of Nancy. Charles fate rimes in German: He successively lost his Hut, Gut, and Blut. He blew it all. Is this the reason that his statue is a head smaller than the others? Read about the history of Burgundy in German.