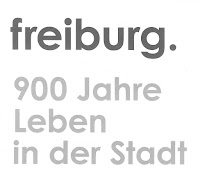 Next year’s anniversary is already casting its shadow. On November 23, the exhibition 900 Years of Life in the City opened in Freiburg’s Augustinermuseum.

Red Baron participated in a special guided tour by one of the curators of the exhibition, Dr. Bertram Jenisch, the man who dug out quite a bit of the exposed objects.

Here is more than an artist’s view of Freiburg around 1150. With Freiburg being the city that is best archeologically explored in Baden-Württemberg, the picture is based on actual findings. In the middle of the fortified place is the parish church in Romanesque style. 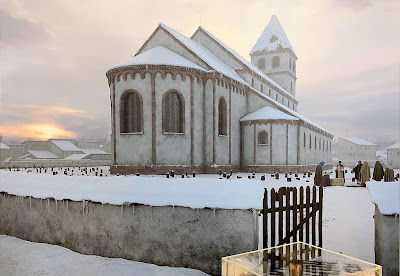 A closer look at the original parish church surrounded by the municipal graveyard in winter. When the construction of the Minster church started around 1200, the old building was removed in stages with the new construction progressing so that worship was always assured. 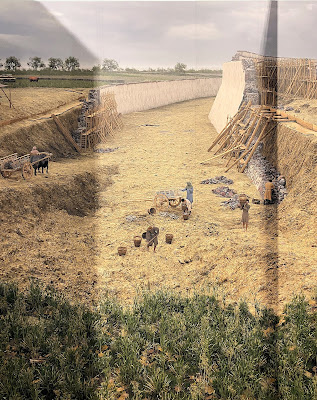 The building of the city wall was a Herculean task. In August 2018, Dr. Jenisch gave a talk at the Museumsgesellschaft. 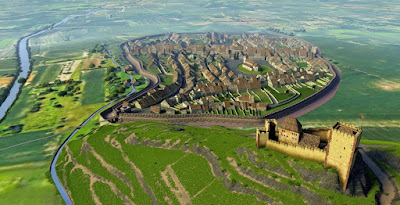 Coming back to the long shot, the still existing Salzstraße is seen on the left starting at the Schwabentor, the gate to Swabia, from where salt, one of the most important trading goods of the Middle Ages, was imported passing along Salt Street.

Starting at St. Martin’s gate, the Große Gass running south to north and west of the parish church crosses Salzstraße at the Fischbrunnen - today Bertoldsbrunnen. Broad Street was Freiburg’s market place, so the fish basin at the fountain where live fish were kept for sale came in handy. In the Middle Ages, markets were the most important outlets for food and other goods like clothing and tools.

Already early, the water of the fast-flowing Dreisam not only was used to feed Freiburg’s Bächle (brooklets, see below) but channeled for the operation of mills and gem cutting and polishing facilities located between the city wall and the river. 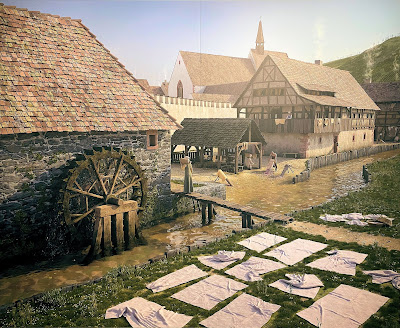 The picture illustrates some activities extra muros along the industrial channel. In the background, the city wall and the church of the Augustinian Monastery.


This brings us to the mystery and controversy about a re-leveling of Freiburg that is still not solved.

Here is a picture of Salzstraße around 1150. Two-story buildings partly timber-framed and with nearly flat shingle roofs border the south side of the street. These houses had basements dug into a layer of gravel.


Already Freiburg’s precursor, an initial settlement of merchants and craftsmen below the Schlossberg, was built on a cone of gravel running downhill into the plain. The natural gradient of the deposits made the construction of artificial courses of water that were taken upstream from the Dreisam river easy. The talus of gravel on which the city stands actually has a thickness of up to 18 meters.

Around the year 1170, some street levels in the city were filled with layers of gravel and raised by up to three meters. Some experts assume that this elaborate construction project was aimed to raise the level of the system of Bächle as a whole, creating a sufficient gradient so that the emerging western suburbs could be supplied with surface water too. This assumption is bitterly contested by other experts, although without providing an alternative explanation.

Houses from the first half of the 12th century aligned to a low street level on Salzstrasse suddenly had their entrance doors on the second floor for the benefit of two superimposed basements.

New buildings after 1175 were aligned to the higher street level. In fact, the number of new buildings at that time exceeds the number expected due to the natural growth of the city, presumably also because the elevation was used to replace wooden with stone buildings showing saddle roofs.

In 1278 Count Egino II allocated a narrow plot of land between the salt road and the city wall to the ordo Sancti Augustini, the Augustinian hermits. For their monastery and church, at least eight houses and courtyards were demolished, the foundations of which were uncovered during the renovation of the Augustinermuseum in 2004. This is the basis of the above picture.

Because in Freiburg, the groundwater level is about 18 meters deep, and the water of the Bächle is not suitable for human consumption, the drinking water supply was channeled from the nearby mountains using wooden pipes. Drinking water was available at public wells, although wealthy people had outlets of their own.

Archaeology in Freiburg is not limited to the Middle Ages. The air raid on November 27, 1944, destroying most of the old city left a heap of ruins behind. 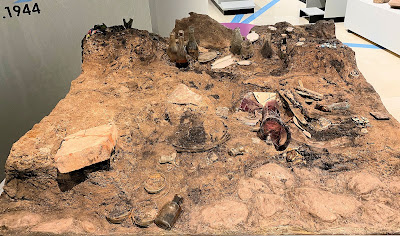 The content of a basement was dug up when a new building was constructed at the site of a destroyed house.
Eingestellt von Red Baron um 20:27