In June 2016, Red Baron participated in a guided tour through Lutherland, but I missed its first day at Erfurt (read here). So the town on the Gera river was high on my list of places to be visited. This is why my first trip in the tailing-off phase of the first Corona wave led me to Erfurt.

Here is the Furt (ford) in the center of town below the famous Krämerbrücke (The Grocer Bridge is longer than the bridges with houses of Florence or Venice).

As for the first syllable in Erfurt, the most probable explanation is that it comes from the old German word "erpf", meaning dark-colored referring to the fertile soil. (?) 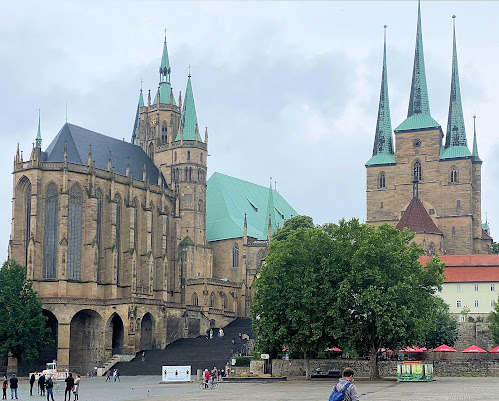 The most impressive view of Erfurt is that of the Dom (cathedral) and the St. Severi church on the cathedral hill. Strangely enough, since the times of St. Boniface Erfurt belongs to the bishopric of Mainz, the municipal code of arms showing the Wheel of Mainz.


At the beginning of the sixteenth century, there had been fierce competition between the two Catholic churches for space on the relatively small hill. While the citizens of Erfurt enlarged their St. Severi church making it wider, the archbishop of Mainz, added a long choir to his Dom placing it on a foundation supported by massive arches, as seen in the photo. The man/woman in the street eventually concluded that the town had the widest, the bishop the longest cathedral.

The hill was densely built on when in June of 1521 students and citizens, as well as farmers from the rural areas around the town, devastated more than 40 curiae of the clergy located on the hill. The action known as the three-day "Pfaffensturm" (storming the priests) was directed against the unique position of the priests and demanded that they should share the civil burdens.

As always Martin Luther was appalled by the violence and criticized the city council for its belated armed intervention against the rebels. Despite this violent introduction of the Reformation in Erfurt in 1521, the two churches on the hill remained Catholic.

In the summer of 1501 Hans Luder, master smelter at Mansfeld sent his son Martin, who later called himself Luther to Erfurt to study law. Before taking up the subject young Martinus had to study the Septem Artes Liberales (seven liberal arts), so he enrolled in the Artist Faculty of the university.

Luther was a diligent student and passed his Baccalaureus examination at the earliest possible date on September 29, 1502.

Due to personal health problems and the plague that raged in Erfurt in the years 1503 to 1504, it took Martinus somewhat longer to complete his primary academic education. He received his Magister Artium as second of 17 candidates on January 6, 1505. This academic title allowed him to study law.

But on July 17, 1505, Luther asked the monastery of the Augustinian hermits in Erfurt to accept him as a monk. His change of mind is often attributed to Martin's shock experience during a thunderstorm, but the plague, too, had shown Luther the fragility of his existence within God's grip. Luther's permanent query was," How to get a merciful God?"

On April 4, 1507, Luther was ordained a priest in the Chapel of St. Kilian at Erfurt's cathedral and held his Primiz (first mass) at the church of the Augustinian monastery on May 2, 1507.

On April 6 to 8, 1521, while a professor of theology in Wittenberg, Luther returned to Erfurt on his way to the Imperial Diet at Worms. He was enthusiastically welcomed by the university and the population and preached in" his" church of the Augustinian monastery.

Albert was the younger brother of the Brandenburg Elector Joachim. In 1509 at the age of 19, he was already a canon in the cathedral chapter at Mainz four years before his ordination. He was elected Archbishop of Magdeburg when he was only 23 years old.

In addition to these offices, Albert was the administrator of the diocese of Halberstadt, Margrave of Brandenburg, Duke of Szczecin and Pomerania, Burgrave of Nuremberg and Prince of the Island of Rügen.

All this was not sufficient, because he did not like to be inferior to his older brother who was elector and strived for the archbishopric of Mainz. This would make him the primate of the German church and, above all, the archchancellor of the empire. When the archbishop of Mainz died in February 1514, the cathedral chapter elected Albrecht, now 24 years old, as a successor.

However, the post was not for nothing. A newly elected bishop requires the Pope's approval, for which 14,000 gilders of palliative money must be paid to Rome. Usually, the dioceses are charged with the fee, but the canons of Mainz were unwilling to pay. So Albert offered to forward the sum, thus making himself guilty of simony.

To raise the money Albert had indulgences sold, a practice Luther, now a professor of theology at Wittenberg, condemned, "Indulgences are all superstition and deceit robbing the poor, simple-minded Christians of their money and soul."

Follow Luther's posting of 95 theses in Wittenberg on October 31, 1517, i.e., the beginning of the Reformation.

The high point of Albert's career was his appointment as a cardinal during the Imperial Diet at Augsburg on August 1, 1518. At this time, Albrecht was 28 years old. He had gone through a real lightning career without precedent. Never before or since has a German cleric attained such a wealth of high and highest offices at such a young age.

In the Reformation, only one-third of Erfurt citizens remained Albert's sheep. In 1530, as prince-bishop of Mainz, he demanded the restoration of his secular rights over his territories in Erfurt.

As far as religion is concerned the Catholic church is always willing to compromise when outnumbered. So in the Treaty of Hammelburg, eight parish churches, including the important Dom and St. Severi Church, as well as the churches of the still existing monasteries, remained Catholic while the many other churches were assigned to the Protestants.


In 1808 Emperor Napoleon invited Tsar Alexander I of Russia and the princes of the German Rhine Confederation to a Fürstenkongress (Congress) at Erfurt. From September 27 to October 14, the city became the center of European politics.

Erfurt had changed its ruler when in the aftermath of the peace of Lunéville (1801) German territories on the left bank of the Rhine River had become French with the promise that those states losing land would be compensated elsewhere with secularized territories. So in 1802, Prussia took possession of the property of the archbishop of Mainz at Erfurt and its surroundings.


This was not for long for in 1806 following the crushing defeat at Jena and Auerstedt, on October 14, Napoleon deprived Prussia of its new acquisition. The emperor declared Erfurt un domaine réservé en son nom personnel (a personal domain reserved to his name). So the Congress of Princes took place on French territory at the former Kurmainzische Statthalterei (the Mainz Governor's Palace).
This palace had been occupied from 1772 on by Karl Theodor Anton Maria Dalberg, the electoral governor and coadjutor to the archbishop of Mainz until 1802 when he became the archbishop himself.


Napoleon's foreign minister Talleyrand reported about Napoleon’s entry into Erfurt on September 27, "An immense crowd filled the streets, and in the square in front of the palace where the emperor was to stay, thousands stood head to head. Everyone wanted to see the man who distributed crowns and thrones and who held the destiny of Europe, joy and hope, misery, and need in his almighty hands. They wanted to see him as closely as possible."

Talleyrand also observed the soapiness of the Germans, "The homage that was paid to Him, both the sincere and the forced and the hypocritical, was monstrous. Flattery bordering on idolatry, and lowliness, which bordered on disgust, seemed to want to outdo each other. At Erfurt, I saw that not only the stupid crowd flattered the mighty, but also the princes humiliated themselves to the most miserable flattery and eye-serving."

In 1808 Napoleon actually was in trouble and had realized, "My power depends on my fame and my fame on the victories I have achieved. My government must dazzle and amaze; if it does not, it will topple."
In Spain, rebels were raising their heads while Austria was preparing for a new course of arms (later known as the 5th Coalition War). Napoleon was quite open to the heir to the Austrian throne, "You rulers, born on the throne, can be beaten twenty times and yet always return to your residences. My reign does not survive the day when I cease to be strong and feared."

The emperor wanted to win the German people, "I want to impress Germany with splendor and glamour at the Fürstenkongress. The Comédie Française will play the French classics, especially Cinna, by Racine. You have to teach the Germans higher concepts of morality. For Tsar Alexander, of course, that doesn't fit; the Russians don't understand something like that at all. But for the Germans, with their transcendental ideas, that's quite something." So Cinna was performed at Erfurt on the very first night.

In view of his troubles, the emperor needed the tsar's goodwill, his keeping still. So he rode out of town to meet Alexander at Linderbach, a village located between Erfurt and Weimar. Under the ringing of the bells, the two rulers entered Erfurt. Eventually, the results of their many encounters were meager.

So Goethe's encounter with Napoleon became the most popular. The emperor received Goethe on October 12, in the governor's palace. After attentively examining him, Napoleon told him, "Vous êtes un homme (You are a man)." Later, the emperor discussed "The Sorrows of Young Werther" with him boasting that he had read the novella thirteen times. In the end, Napoleon presented Goethe with the Cross of the Legion of Honour.

Being a lifelong admirer of Napoleon old Goethe continued to wear the Cross of the Legion of Honour during and also after the Wars of the Liberation that many contemporaries registered indignantly. Wilhelm von Humboldt wrote," Without the legion cross, Goethe never leaves the house, and the one who gave it to him he always calls my emperor."


On March 19, 1970, the Chancellor of the Federal Republic of Germany, Willy Brandt met with the Chairman of the Council of Ministers of the GDR Willi Stoph at the Interhotel "Erfurter Hof."

After the official welcome at the main station, the heads of government walked to the nearby conference venue, the "Erfurter Hof," accompanied by thousands of GDR citizens behind barricades shouting, "Willy, Willy!"

The federal chancellor appeared to the people of the GDR as a bearer of hope. When the two leaders had entered the hotel, they continued to cheer him and demanded his appearance shouting, "Willy Brandt, Willy Brandt to the window."

When he appeared briefly at the window, the people waved at him enthusiastically, hats flying, caps waving.

The meeting was the beginning of political thaw between the two German governments. This and the following meetings led to a facilitation of travel for the citizens of the two states and finally to German unification.
Eingestellt von Red Baron um 23:10