My first blog about my recent trip to Erfurt was devoted to the city's history. My second blog will be on the lighter side, presenting the reader with some splinters.

When I arrived at Erfurt after nearly five hours of a train ride, my first walk was into a Café. Corona oblige, the Deutsche Bahn did not serve Butterkuchen or coffee while you were seated, and the pastry in Thuringia is famous.

I checked into the Augustinum monastery for three nights, where I had asked to be booked in Martin Luther's cell.

The following morning the gardener - isn't it always the gardener? - stirred me from my dreams: Bedded on straw Scholar Luther slept with his co-students in a big room. 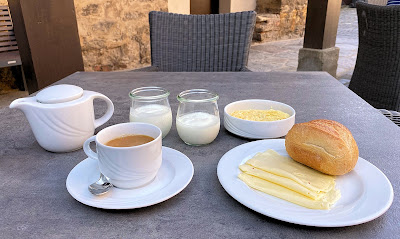 I took my frugal Luther-like breakfast - except for the coffee, I can't live without - bread, cheese, yogurt, and scrambled eggs in the Renaissance Court. 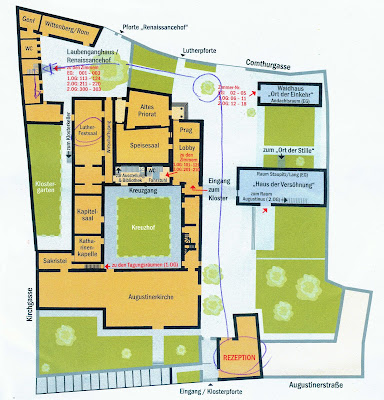 Here are two plans of the vast monastery complex. 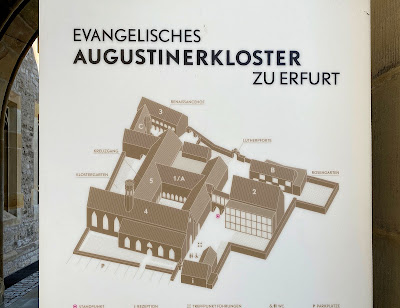 You may know that the Luther symbol is the rose, so I must include some photos I took at the Augustinian monastery. 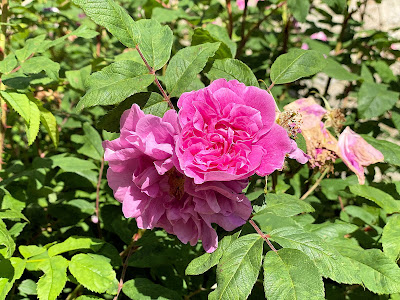 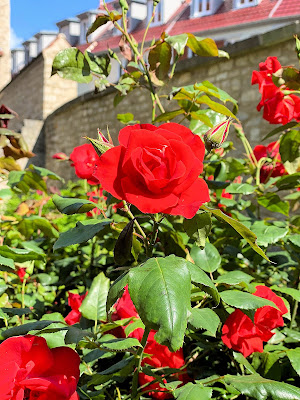 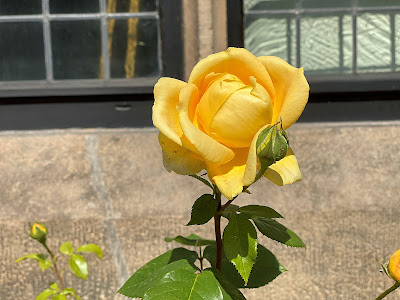 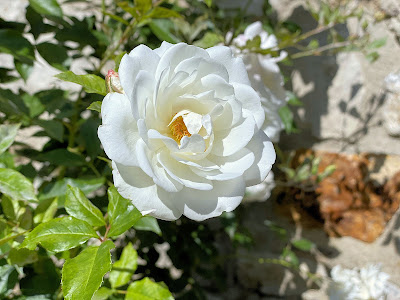 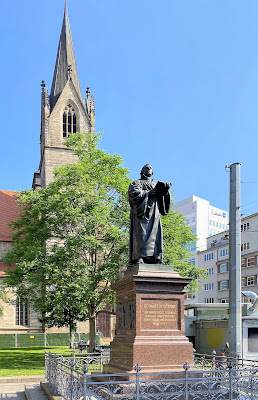 Heading for Krämerbrücke (Grocer Bridge), I passed Him on Am Anger, the former common green now being a large square in the middle of Erfurt. The church in the back is Kaufmannskirche St. Gregor (Merchant's Church St Gregory), a 14th-century Gothic parish church.

I had a local (!) Blauer Zweigelt rose, wine from the Saale-Unstrut region on Krämerbrücke ... 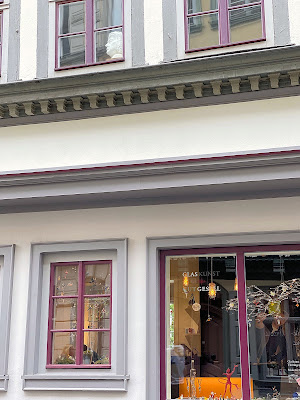 ...with old Bach watching me from a window vis-a-vis. 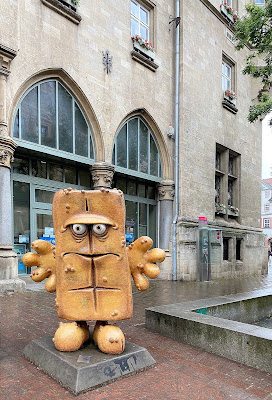 Walking in the direction of the cathedral square, I met Bernd das Brot. Erfurt is the home of KiKa (Kinderkanal, i.e., Children's Channel). With Sesame Street being such a success on German television, they created a German version staring Bernd the Bread instead of grumbling Bert. 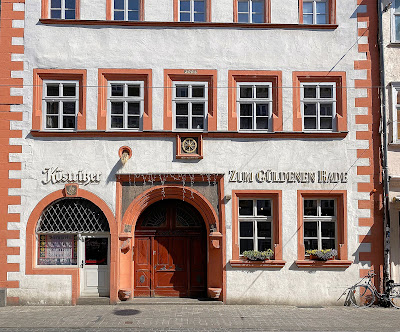 On the recommendation of a good friend, I had dinner at the restaurant To the Golden Wheel, reminiscing the red Wheel of Mainz. Note the straw in the hole above the entrance being a good sign for it means the fresh beer is on draft. 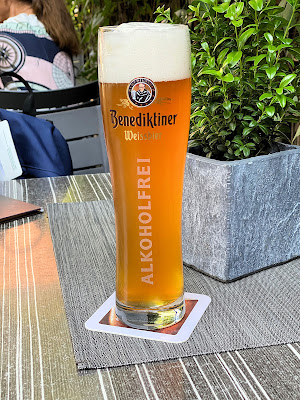 I was thirsty, so I hade an alcohol-free wheat beer brewed by Benedictinians as an appetizer. Old man, get your water balance right! 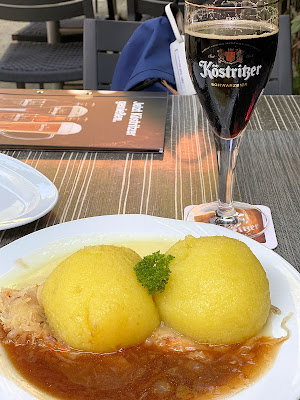 Red Baron choose a local speciality for dinner called Thüringer Klöße gefüllt mit Rot- und Leberwurst auf Sauerkraut an Zwiebel und Meerrettichsauce  (Thuringian dumplings filled with red and liver sausage on sauerkraut with onion and horseradish sauce). The Köstritzer I drank to the health of Kenneth, a friend in Madison.


The following morning I went to the market on Domplatz (cathedral square).  Here I had my real Thüringer Bratwurst remembering the good old times in Weimar. 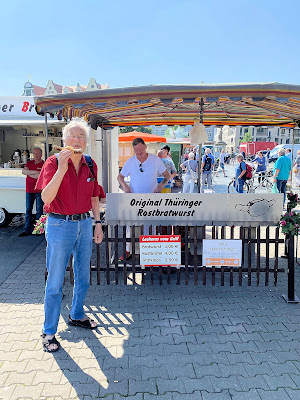 It is always the same. You ask the one taking the picture to close in on the wurst, and then the person does not follow the advice. 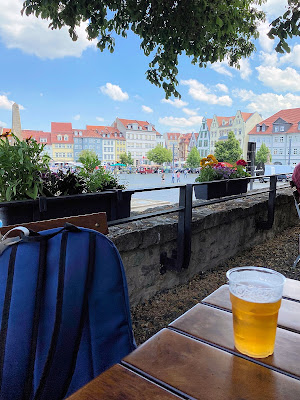 I became thirsty and went to the nearby beer garden at the foot of the cathedral hill, watching the market people from a distance.  Regrettably, they served the beer in plastic cups.

Passing the market to my appointment for the guided tour, an offer caught my eye. 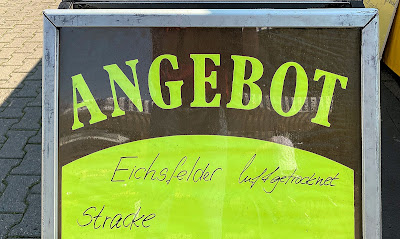 Air-dried Stracke from the Eichsfeld. This is what I call Luther's sausage. Although I gave up consuming sausages - I eat them on special occasions (see above) - I could not resist and bought a small Stracke. 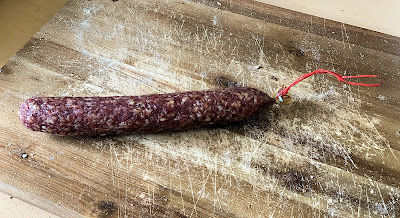 Here is the thin object of desire. I read the following, "The Eichsfelder sausage gets its unmistakable character mainly from the warm meat processing. Predominantly used are meat cuts from pigs from the region with a longer fattening period. Traditional natural spices and the artisan art of the sausage makers of the Eichsfeld give this firm raw sausage an extraordinary taste. The Eichsfelder Stracke receives its perfection by gentle several months of climate ripening."


The guided tour started at 11 a.m. and was the first one allowed at Erfurt in the presently waning Corona pandemic. Red Baron actually had booked two tours, one on foot in the morning and one by streetcar in the late afternoon.

Our guide reminded the reduced number of participants of the distance rule. Mouth-nose-covers were not required because our group refrained from indoor sightseeing.

Erfurt was not destroyed in the Second World War. A planned massive air raid by the Royal Air Force in the early spring of 1945 was called off at short notice because the GIs were already ante portas. The old building fabric, which then disintegrated under the GDR regime, was lovingly restored after the German reunification.

Erfurt became rich with the cultivation of woad during the Middle Ages. The decline came when blue indigo flooded the market. Today, horticulture and the production of flower seeds are an essential part of Erfurt's economy.

You can become wealthy too. Just spend two euros and plant your proper woad. 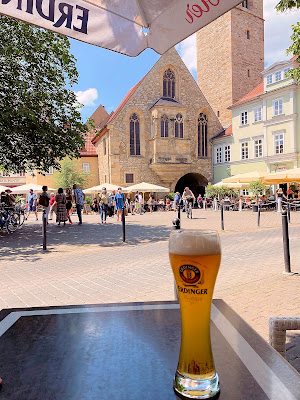 It was hot in Erfurt on Saturday. I rested with a fresh Erdinger wheat beer and watched tourists entering Krämerbrücke through a tunnel under Aegidienkirche. 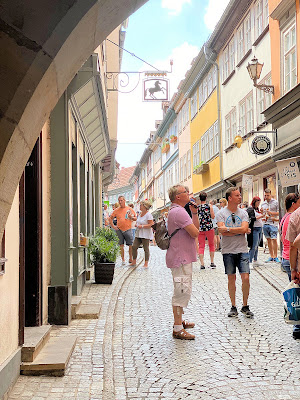 The producer of unusual ice cream on Krämerbrücke served a long line of customers. The gentleman in the center can't still make up his mind on the taste of ice cream he wants.


This was not a city tour, but we profited from Erfurt's extended streetcar net to drive by several sights in the suburbs and on the peripheric.

We made no stops that had disturbed the regular streetcar schedule. Only at turning loops far out of town, we left the vehicle and had a complete air exchange both in our lungs and in the streetcar.
Eingestellt von Red Baron um 21:27