Where Shall We Store Our Radioactive Waste? 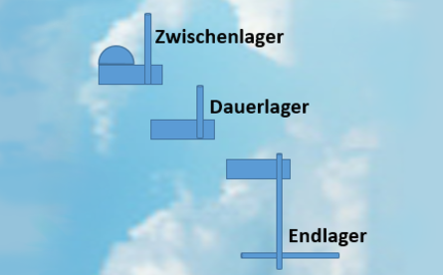 After fourteen years of absence from the radiation protection scene Red Baron took the ICE train to Mainz ordering as usual the pot of coffee and the notorious Butterkuchen. While waiting to be served I opened my iPad to read the latest edition of the Badische Zeitung (BZ) online. I quickly passed over national and international political news that I had already read from other sources and concentrated on Freiburg's locals.

When I opened the page with the letters to the editor I was shocked reading the following title: Sie sollen den radioaktiven Müll in ihre Gärten oder Parkanlagen aufnehmen (They should take the radioactive waste to store it in their gardens and parks). In his letter to the BZ the writer accused operators, banks, share holders, and politicians being the profiteers of atomic energy while they were downplaying the radioactive waste produced in nuclear power reactors. The author suggested that these people shall proof that radioactivity is as harmless as they had propagated. They should be forced to live in atomic ghettos loaded with radioactive waste where they shall eat their home grown vegetables. It is not fair that some people had earned big money with electricity produced by nuclear power while we who had nothing to say must now take the rap for it.

The word "ghetto" reminded me of Germany's darkest past and drove me nuts. I started drafting an answer immediately. However considering that anger is a bad counselor I decided to wait for the outcome of the symposium before writing a letter to the BZ.

In 1962 Germany's first nuclear power plant in Kahl had been connected to the grid and since then everybody and not only operators of nuclear reactors has profited from the electricity produced. When Chancellor Konrad Adenauer and his Atomminister Franz Josef Strauß propagated Atoms for Peace in my country in 1955 they found a wide societal support. As time went by more and more nuclear power stations were built and produced electricity without endangering the population until 2011. In that year the Federal Government shocked by the Fukushima catastrophe decided the phasing out of nuclear energy in Germany. Now the installations already shut-down and those still to be decommissioned must be stripped down and the radioactive material be safely disposed of. To finance this work operators of nuclear power station had to build up reserves over the years that by now amount to several billion euros.

Before the symposium started the executive board of the Fachverband gave a press conference with Red Baron sitting in the back listening. Presently spent fuel elements and other radioactive material are safely kept in intermediate storage near the reactor stations. The radioactivity is cooling down and waiting for a final storage that we all need. Even people that always have been and still are opposed to nuclear power must admit that our generation having profited from nuclear energy must clean up the radioactivity and not leave the job to our descendants. Germany needs a final repository. The next day a well balanced article in the Rhein Main Presse had the attention-grabbing headline: Wohin mit dem radioaktiven Gift? (Where to place the radioactive poison?). The author wanted to be sure that people read his column but somewhat spoiled the issue.

Indeed, the question is where can we find places to safely store material still presenting a hazard in more than 100,000 years? Such a choice not only needs our consent but that of future generations too. Germans stoke their Angst and trust their Bauchgefühl (gut feeling) so it will be difficult to reach the same general consent on a repository as in the case of the entry in and exit out of nuclear power.

The Federal Government has set up a commission of 33 persons to deal with the deposition of highly-radioactive waste according to the Standortauswahlgesetz (Law for selecting a site). The German government called scientists, members of environmental associations, representatives of the Churches!!, economy, trade unions, members of parliament and state governments into the commission to find a consensus on a site until December 31, 2015. In their initial sessions the members of the commission lost their time on points of order; so I doubt that they will meet the deadline set by the government.

I got a reaction to my letter to the editor in which the writer nearly duck the issue of the safe depository. Instead he started his letter with a general discussion on nuclear energy mentioning among other things the victims who had died from incorporating radioactivity while mining uranium or reprocessing fuel elements. When further on he denounced reactor research that is still performed in Germany he had definitely opened the can of nuclear worms or shall I rather say Pandora's Atomic Box? Remember: I had only asked for a national consent on a depository for highly radioactive waste, a safe site to bury our sins? of the past.
Eingestellt von Red Baron um 18:41