Red Baron is fascinated when languages coin catchy words for specific items or situations. A somewhat strange example is the use of Handy in German for a cell phone. Some of my fellow countrymen are greatly astonished when they find out that native English speakers do not know the German meaning of handy.

Many English words are adopted in German especially in information technology. The term "browser" is used everywhere although there is a good old German word Stöberer that nobody uses. I am even more impressed when German words as Waldsterben or Energiewende with their exact meaning are adopted by the English-speaking community.

What I do not like are Anglicisms introduced into German when there is a perfect term in my mother tongue. So when the previously described Stadtkümmerer was perverted into Citymanager Red Baron wrote a letter to the editor of the Badische Zeitung complaining about the wrong translation. 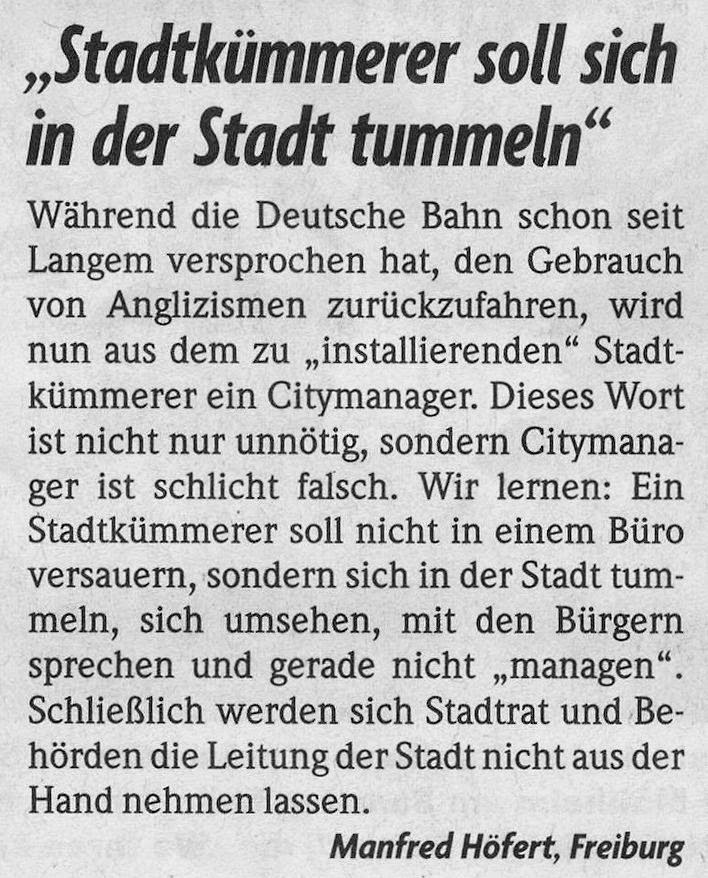 Even the German Railway known for its excessive usage of English has promised to reduce its Anglicisms. In fact, a Stadtkümmerer does not manage the city. This task falls to the city council and the executive. The city caretaker should not be an office sitter but rather roam the city, listen and talk to the people and report about his findings to the authorities.


Today I learned about the new job opportunity of a Schlagloch-Sheriff (pothole sheriff). Since the job presently does not exist the ACE (European Automobile Club) operates a website where pothole hunters may bring their findings to the attention of the authorities. I do not drive so much anymore and the formation of a few potholes in Freiburg's streets following a relatively mild winter does not bother me. However, I am upset by the "language pothole" of Schlagloch-Sheriff.

Why use an English word when we have the perfect example of Staumelder (a person reporting traffic jams)? You guessed it: the correct German word for Schlagloch-Sheriff should be Schlaglochmelder.