Freiburg has passed the critical mark of an averaged 50 Covid-19 infections per 100,000 inhabitants and week even though since last Saturday, stricter rules had been in force in Freiburg, for example, an obligation to wear a Mund-Nasen-Bedeckung (mouth-nose-cover) at the Münstermarkt (the market around the cathedral) and all other markets. The official figure published by the State Health Office from Tuesday evening was 58 averaged Covid-19 infections.
This morning Freiburg's Lord Mayor Martin Horn held a public video conference jointly with the University's Medical Faculty director Professor Frederik Wenz calming down the population and stressing that the city is better prepared for this second wave of Covid-19 than it was in the spring.
Since Baden-Württemberg is approaching the magic mark of 50 fast, Horn is waiting for the state to implement more and stricter Corona rules that Freiburg will implement consequently. 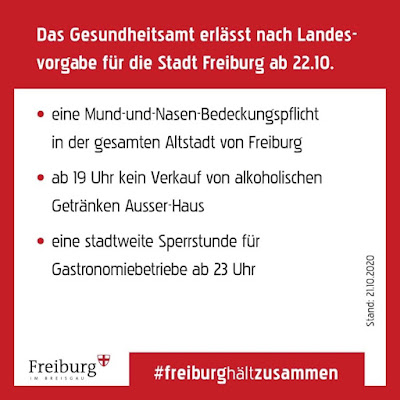 The reaction promptly came in the evening:
According to state regulations, the public health department issued a decree for the city of Freiburg from October 22 onwards:
- an obligation to cover the mouth and nose in the entire old town of Freiburg
- no sale of alcoholic beverages publicly from 7 p.m.
- city-wide closing time for gastronomy businesses at 11 p.m.
In the meantime, the total number of new infections in Germany has passed 10,000 per day but is likely to increase during the coming months.
Everybody talks about 5G that the normal Internet user does not need, but no new mobile phone comes without. Red Baron would already be happy to meet a 4G coverage throughout my trips in Germany.
Now the head of the Robert-Koch-Institute, Professor Lothar Wieler, told his listeners to avoid four Gs that however have nothing to do with the transmisson of data, i.e., Geschlossene Räume, Gruppen und Gedränge sowie Gespräche in lebhafter Atmosphäre und engem Kontakt.
So during the coming autumn and winter months, people should not only apply AHAL. For my English-speaking friends, it will likewise be important in the translation to avoid the five Cs: "Closed rooms, groups, and crowds as well as conversations in a lively atmosphere and in close contact."
The project of the Freiburg-Madison-Gesellschaft "Auswandererlieder or The Sound of Freedom" scheduled for today was already canceled ten days ago. Is there no hope? 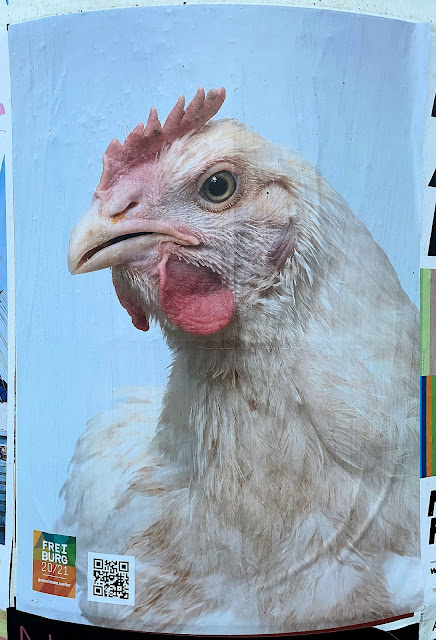 This morning Red Baron passed a poster. I scanned the code and got the following message:
Eco-logics. The new spheres of the world
An art and event project in the context of Freiburg's city anniversary from October 9 to November 29, 2020. Here is the strange text translated:
In the age of the "Anthropocene," it becomes more and more obvious that we are robbing ourselves and other living beings of the basis of existence. Whether plants, animals, or minerals - man/woman is not the "measure of all things."
Complex relationships and dynamics determine the structure of human existence in the biosphere. This integration into worldwide climatic and microbiological processes becomes more and more noticeable from year to year.
Should I visit the new spheres of the world or reduce my contacts to zero during the coming weeks giving Corona no chance?
Eingestellt von Red Baron um 21:14