In Ulm, um Ulm, und um Ulm herum is a German tongue-twister. On my way back from Augsburg to Freiburg, I visited the city known for the highest steeple in the world and for being Albert Einstein's birthplace. I stayed at the Intercity Hotel near Central Station.

My pedestrian visit followed the tongue-twister walking in Ulm, about Ulm, and around Ulm.
When walking through the pedestrian zone in the direction of the Minster, I suddenly saw a memorial of Einstein's birthplace in the form of a geometrical structure. During the last war, the houses in the Bahnhofsviertel (quarter around the train station) were leveled to the ground but never rebuilt. 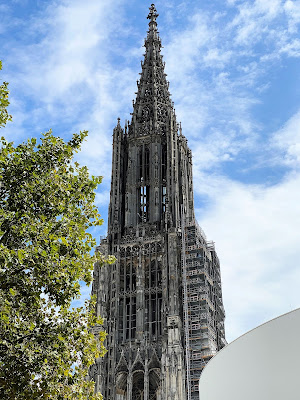 I could not miss Ulm's Minster Church from a distance. 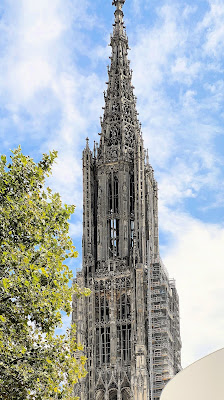 The steeple is so high that the photo required more editing to give my readers the right feeling. 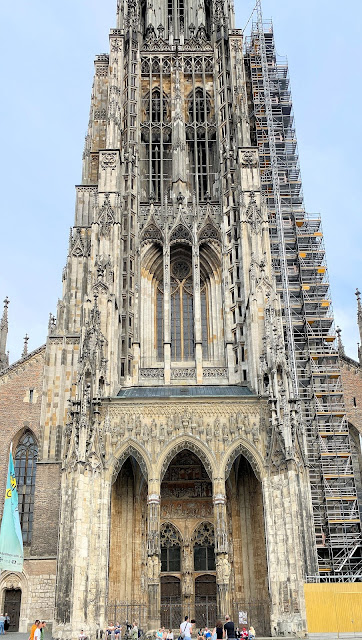 Like the Freiburg Minster, the one in Ulm is never free of scaffolding. 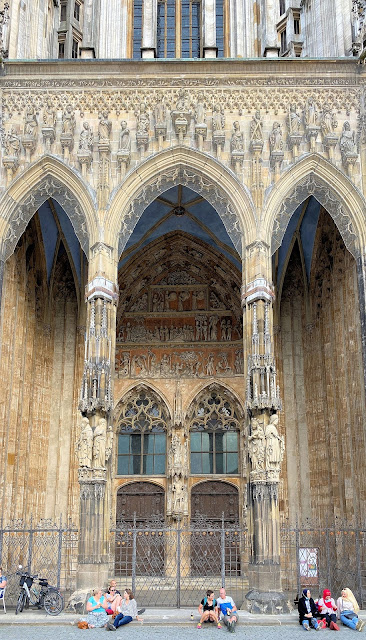 The front entrance was locked, so tourists occupied the steps. 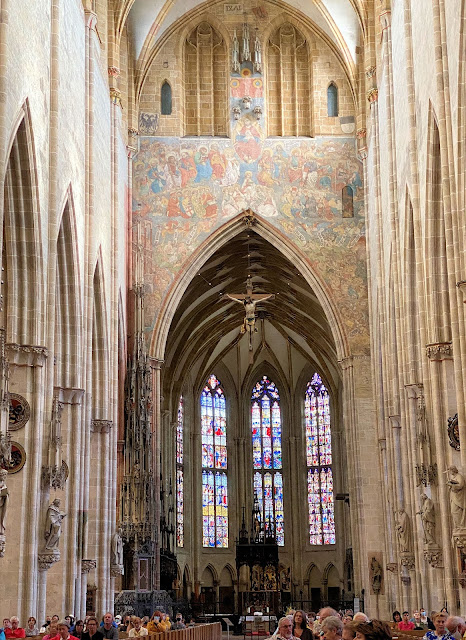 I entered the church through a side door and suddenly found myself among people attending the midday devotion listening to organ and sermon. 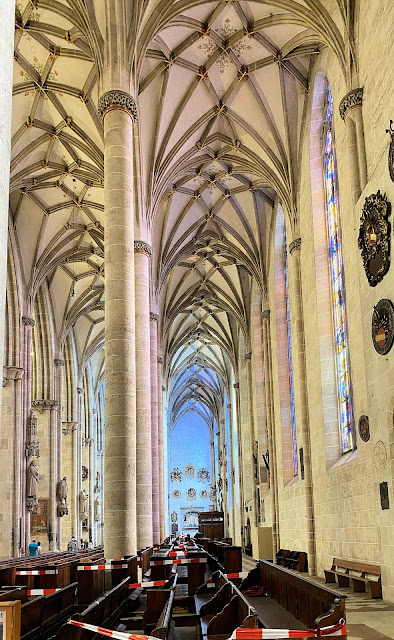 When leaving the Minster by the side aisle, Covid-19 showed its ugly barrier tapes. 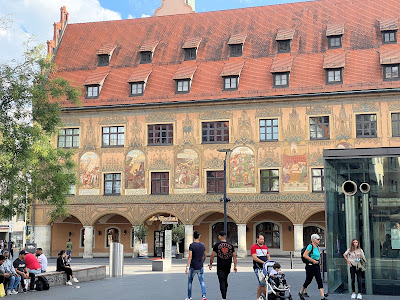 The famous Ulmer Rathaus was on my way to the Danube River. 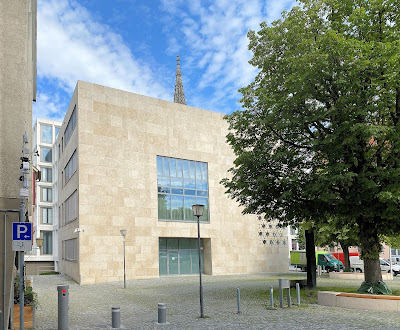 Looking for lunch, I passed by Ulm's new synagogue ... 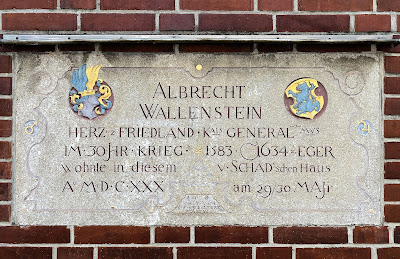 ... and by a panel reminding that General Wallenstein stayed in Ulm at the von Schad Haus on May 29/30, 1630, during the Thirty Years War. 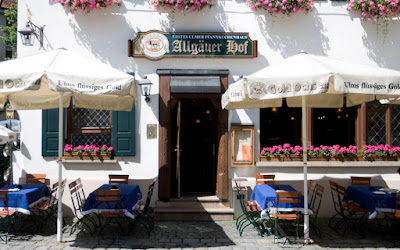 Red Baron sat outside for lunch, at the Erstes Ulmer Pfannkuchenhaus/Allgäuer Hof located near the river in the Fisher Quarter. 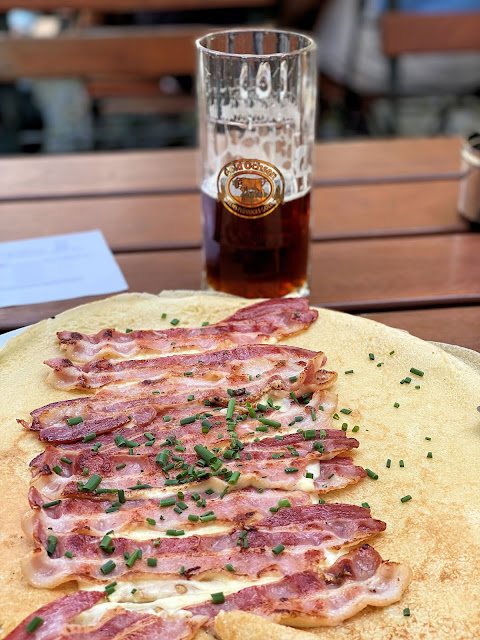 I had to wait for my bacon pancake for some time. In the meantime, the level of my local Gold Ochsen Kellerbier Dunkel (Golden Ox dark cellar beer) had dramatically dropped. 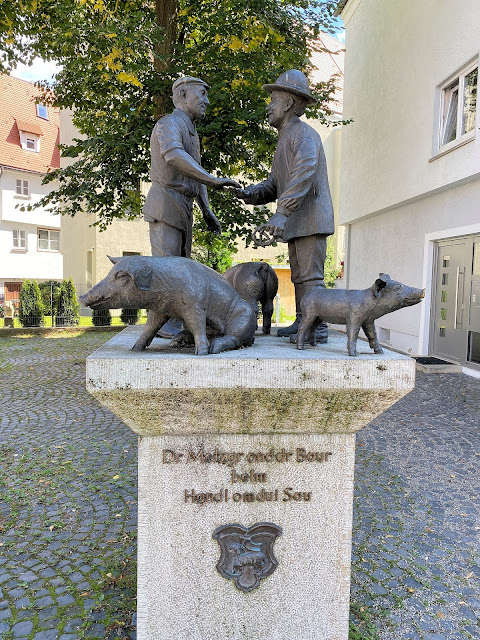 On my way to the Danube River, I passed a monument for a farmer and his pig trader ... 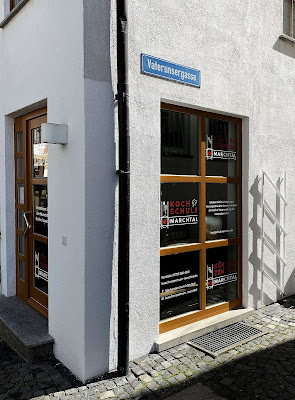 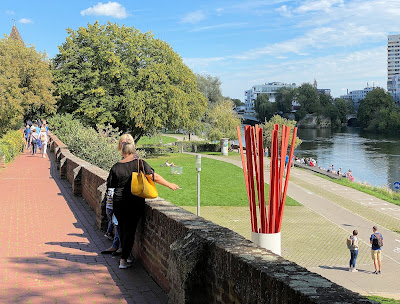 Walking along the Danube River, you can take the Uferpromenade (the low way) but I took the high way on top of the old city wall and had a good look into the Bavarian town of Neu Ulm (New Ulm) on the other side of the river bank. 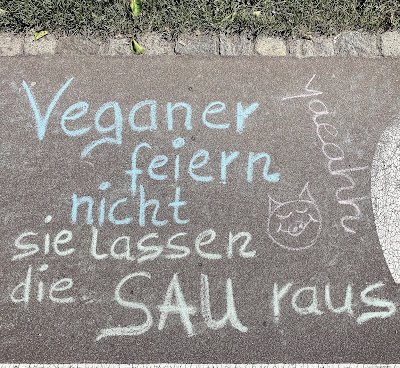 As I moved on, the old city wall came to an end, and I had to change to the low way.  The guys and girls of Fridays For Future had chalked many of their slogans on the ground.  This one literally translates into "Vegans don't party; they set the sow free, i.e., don't eat meat". But the phrase is a pun in German. Die Sau rauslassen means partying without any limit or, as the dictionary teaches me, "let it all hang out." 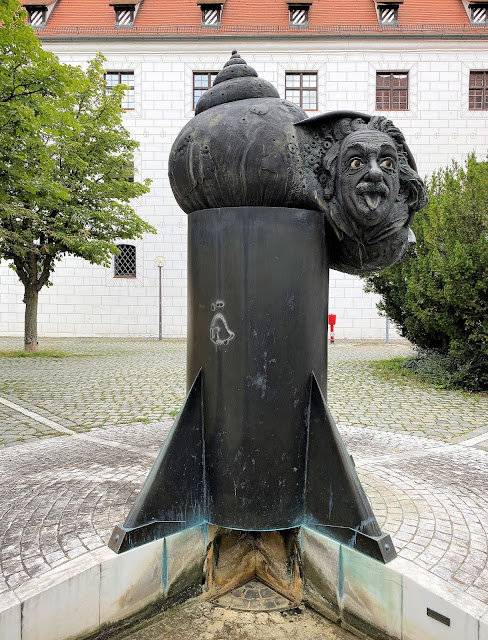 Strangely enough, the Einstein fountain faces the entrance to Ulm's courthouse. Its lower part is a rocket stump presenting the start into a new area with Einstein's discoveries. The large snail shell growing out of the rocket stands for the skepticism towards technology. Albert Einstein's head peeps out of the shell showing him with his famous tongue stuck out. 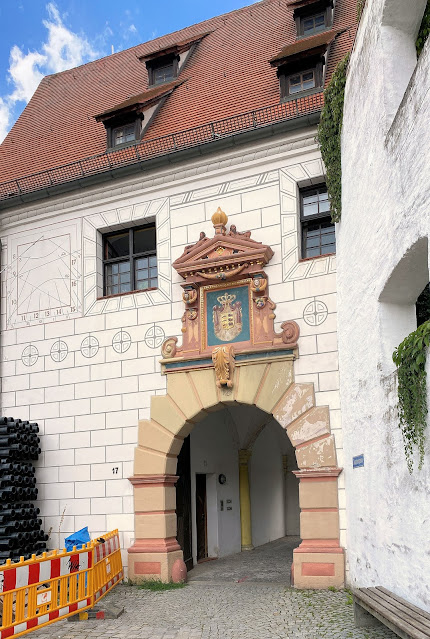 In the meantime, I had reached the landside city wall passing through a redecorated gate of the renovated Zeughaus (arsenal). 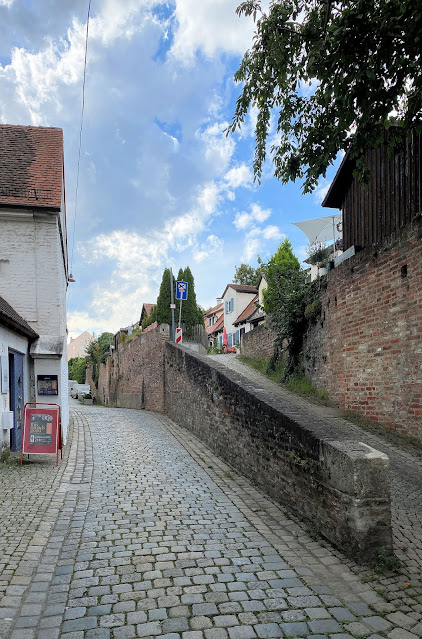 I continued walking along the inner side of the wall. 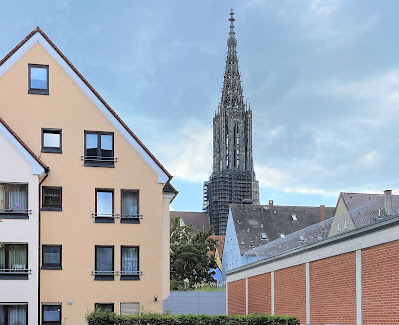 On my way, I had another astonishing look at Ulm's Minster Church. 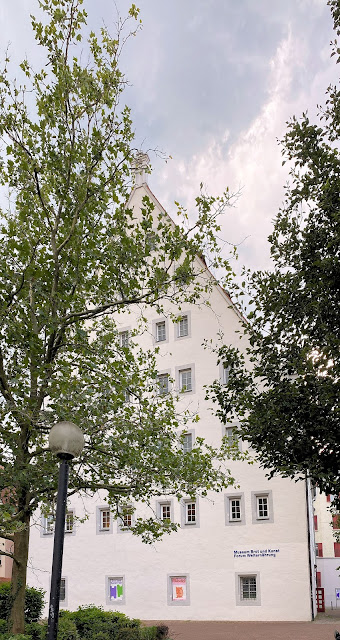 On the other end of the city, I eventually reached my final goal the Museum Brot und Kunst (Museum Bread and Art). Baking is possibly the oldest craft when men settled, changing from hunters to farmers while women baked the bread. With the process of baking being well known, I rather show you some artwork related to bread sparing out temporary paintings for copyright reasons. 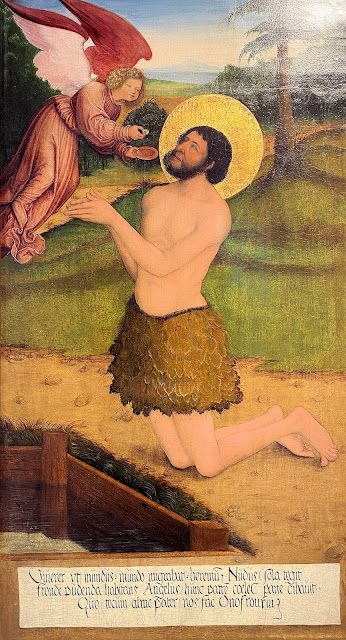 I did not know Saint Onuphrius. As a hermit in the Egyptian desert, he apparently lived on altar bread alone brought to him every second day by an angel. He is one of the Desert Fathers.
These two naturalistic paintings by Fritz Gärtner found all my attention as possible precursors of the art in Nazi Germany that was no longer characterized by Bread and Soil but by Blut und Boden (Blood and Soil).
"Here we are, the date is right," I thought when looking at the painting by Joseph Multrus. A Germanic family assembled around a table, the father saying grace, the mother cutting a slice of bread from a loaf while the hungry children eat already.
Well, I was mistaken. Joseph Multrus (1898-1957) was a Czech artist. He studied at the School of Applied Arts, and then at the Academy of Fine Arts in Prague, where he became a member of the Union of Fine Artists in 1924.

In the Czech Wikipedia, I found the following information: He created mostly large-format works regarding the social aspects of the workers' environment. He preferred dark colors with a variety of gray tones. ... His love of J. S. Bach's music manifested itself in the dark and often depressing mood of his paintings ... His paintings of the working class were often used as gifts for embassies and on state visits.

Rather the art of the working class?
Eingestellt von Red Baron um 12:41