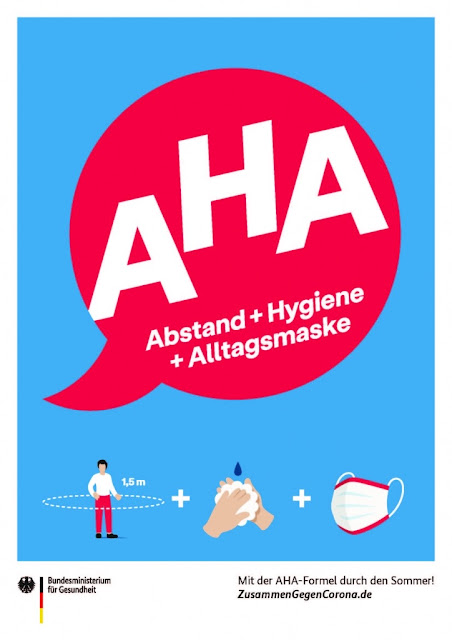 In a previous blog I made my readers familiar with the triad AHA, i.e., distance, handwashing, and wearing a simple mask, a German rule in times of Corona. Now, this triad has been enlarged to a foursome by adding the letter L to it standing for the German word lüften (airing).

During the warm and sometimes hot summer, we all had our meetings and common meals in restaurants outdoors. Even in these October days, I see people in Freiburg dressed in pullovers, coats, and ski jackets sitting on sidewalks outside restaurants and cafés being served. They are trying to catch the last sun rays that don’t warm anymore.

When in the coming cold season, we have to stay indoors, the magic word is lüften to make those nasty Corona-contaminated aerosols gone with the wind.
In Germany lüften seems to be an easy job. We tilt the window in the kitchen and briefly tear it open in the bathroom.

When the British "Guardian" writes, “Aeration is something of a national obsession, Germans open their windows twice a day, even in winter!”, the world apparently marvels at our domestic ventilation measures.

Here is an enthusiastic video about German windows:

But richtig lüften is a complicated procedure because just opening or tilting a window is not sufficient. Get familiar with Stoßlüften (push ventilation) and Querlüften (cross ventilation) for only those techniques allow for a full exchange of “used” with fresh air.

During Stoßlüften you open  for a short time all windows of a room wide allowing for a full exchange of air and as a side effect the escape of heat.
Querlüften is recommended for a better exchange of air. It is more efficient when you open windows in your house or apartment on opposite ends allowing for Durchzug (draught).

Here is where the trouble starts. Germans abhor draughts. Whenever you sit in a ventilated room, e.g., on a plane, the outcry, “Hier ziehts!*” is frequent.
*Help!, I feel a draught.

Recently during the dinner at my class reunion, I was sitting at the end of a table near a window that I liked to be kept ajar. Soon the classmate sitting opposite whined, “Es zieht”, and the window was closed.
When after a while, I demonstrated with my pocket CO2-meter that we had reached a concentration of more than 1400 ppm inside the room instead of normally 450 ppm in the environment, the window was opened again.
N.B.: This meter is no test for the SARS-CoV-2 concentration in aerosols but clearly shows whether the air has become stale with CO2 and lüften is called for.
The same is true at my Kieser Training. With most of the windows open I now rather support draughts than accepting billowing aerosol clouds. What will happen when it is freezing cold outside. Can we hope for a mild winter as in recent years?