Once in awhile, roving theater groups performing musicals come to Freiburg's Konzerthaus. These groups travel and play all over Germany and in major cities. While they open in Hamburg, they next play Berlin, then on to Munich, lots of laughs in Munich, their next jump is Cologne ... then Karlsruhe. then Freiburg* for Freiburg is a negligible quantity.
*spoofing the lyrics of Cole Porter's musical Kiss Me Kate

On January Red Baron saw My Fair Lady ... in German. In my opinion, this is the best musical ever written. The ensemble came along with its small band conducted by a lady. All the lyrics were sung in German. Mind you, it wasn't just a simple translation, but the texts were re-written and tailored in the dialect spoken in Berlin.

Eliza Doolittle has difficulties pronouncing words like rain correctly, and in German, Elisa's "ü" umlauts don't sound as they should in high German. Here is the dialogue between Eliza/Elisa and Professor Henry Higgins:


London's Eliza is dropping her "Hs" in Hartford, Hereford, and Hampshire, while Berlin's Elisa doesn't clearly distinguish the "e" and the "ä" so she sees crows nearby but deer still nearer.

The German lyrics translated into English, become, "It turns so green when Spain's blossoms bloom." This silly German text containing the word Spain is necessary because in the musical Higgins and Eliza celebrate their success dancing the Pasodoble, she "could have danced all night and still have begged for more."

Back to the roots. I studied Bernard Shaw's Pygmalion and couldn't find the turning point of the musical in the stage play. The scene dealing with the pronunciation was part of the film version of Pygmalion in 1938, and there is no hint of whether Bernard Shaw had been annoyed by this addition.

On the other hand, the author was bitterly opposed to a Higgins-Eliza Happy End. He had deliberately left the end open, but the public asked for more.

On entering the room, Eliza announces, "I washed my face and hands before I come, I did." Higgins's reaction is a triumphant smile, uttering, "Where the devil are my slippers, Eliza?"

Curtain? For the latest production of My Fair Lady on Broadway in 2018, the producer "has decided that, in the enlightened #MeToo age, we cannot have Eliza return to being a doormat. So here, Higgins utters the final line pugnaciously, in Eliza's face; she stares back at him silently, then gazes off toward the audience — and walks out.."

Yesterday Red Baron saw another musical at Freiburg’s Konzerthaus called That’s Life. It is based on the life of Frankie boy or as they later called him the Voice. 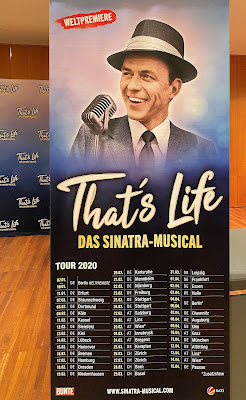 This musical had its World Premiere in Berlin on January 7. Actually, they opened in Berlin, and next played Erfurt ...

In Freiburg, the musical started with the Sinatra hit “Come fly with me,” followed by Cole Porter’s “I’ve got you under my skin” sung by Tam Ward. The Scotsman wrote about himself, ”I have previously worked at the Royal National Theatre in London doing Cyrano De Bergerac and The False Servant. I did Hair at The Old Vic and Cabaret at the Lyric Shaftsbury Avenue in The West End. I have recently finished playing the lead role of Frank Sinatra in The Rat Pack Live From Las Vegas.”

Tam was the revelation of the evening, for if you closed your eyes, you listened to the Voice, articulation, phrasing, and timbre were just right.

In his self-description, Tam mentions that he speaks several accents, Irish, Cockney, Scottish, and New York. On stage, he sang in American, but he also spoke English throughout the musical. The fact that the other characters spoke German did not disturb at all but instead added a certain charm to the whole presentation.

We had "All" and not "nothing at all" about Sinatra’s first wife Nancy Barbato, his affair with Ava Gardner, and the desire of an old man for twenty-year-old Mia Farrow.

Frank started his carrier with the orchestra of Harry James, moved on to Tommy Dorsey, and sang with Benny Goodman. Neither were forgotten his involvement with the Mafia, his "High Hopes" for Jack Kennedy, and his appearance with the Rat Pack (Frank Sinatra, Dean Martin, and Sammy Davis Jr.) at Las Vegas.

The musical ended with the oldie "My Way," but we spectators asked for more, and so Tam added the love song about the city that never sleeps. 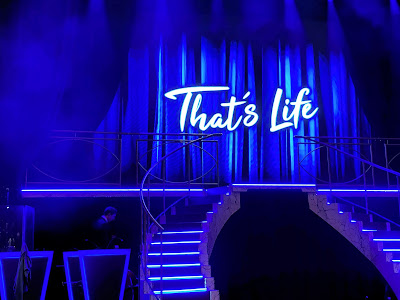 Red Baron regards That’s Life being a great success. He likes the idea of stringing together 25 Sinatra hits accompanied by a live orchestra that excellently followed through all the musical styles.
Eingestellt von Red Baron um 18:58