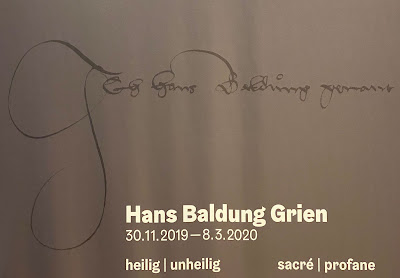 Starting in 1503, Hans Baldung Grien learned the trade at the atelier of Albrecht Dürer in Nuremberg. At that time, many men were called John, so some art historians claim that Hans, because he loved the color green so much, got the byname Grien distinguishing him from his colleagues in Dürer's workshop.

Here is Hans's early self-portrait showing him as a self-confident young man.


"The stained glass is from the Löffelholz Window at the Nuremberg parish church Saint Lorenz. Here Baldung worked together with the important Nuremberg workshop of Veit Hirschvogel, the Elder, whereby he probably not only provided the design but was also involved in the execution of the work himself. Magnificent details such as the ermine-trimmed cloak and the kneeling king's hat, the goldsmith's objects serving as gifts, as well as the colorful dawn making the sky glow are worth a special mention."

St. Joseph, not being Jesus's bodily father, is an embarrassing figure for the teaching Church. Medieval paintings of the Holy Family frequently show the carpenter as a small, unimportant, and hidden figure sometimes placed in a corner. In Baldung's Holy Family, Joseph dominates the painting.

"Baldung probably created this devotional picture towards the end of his Nuremberg years. The richly detailed interior offering a view of a river landscape is based on Dutch models. An angel presents Child Jesus with a pear, symbol for overcoming the original sin. Mary's thoughtful expression is explained by the knowledge of the suffering her son is about to endure. The box in the foreground, reminiscent of a sarcophagus, could also be a hint."


Being a well-known artist by 1512, Baldung moved to Freiburg and later in 1519 to Strasborrg.

Yesterday Red Baron listened to a talk by Dr. Eva Maria Breisig at the mason's lodge of the Minster.

The Freiburg Minster Church enshrines Hans's most frivolous altarpiece showing Christ half-naked in his red cape crowning his mother as the Heavenly Queen.

The altarpiece, finished on 12 June 1512, was not on exhibition at Karlsruhe but could be explored in an informative slide show.

During his time at Freiburg, Baldung employed a whole team of painters, but the Madonna with the red background hanging in Freiburg's Augustinermuseum clearly carries his master's signature.

"Maria and the Child are set off from the abstract bright red background in a very plastic and precisely modeled way. Both the unusual red background and the death-like sleep of the Child go back to early Christian models. A cryptic dating of the painting has led to various interpretations. Recent infrared photographs show a Gothic four, which would indicate that this painting was created in Baldung's Freiburg period."


When the Reformation was established at Strasbourg, the commissions for paintings with religious motives dried up, and many an artist ended in misery. Not so Hans the Grien. He delivered not only Madonnas but witches too.

"In his extravagant panel, Baldung stylizes the witches as the epitome of seductive female power. His theme is the sensual, even provocative staging of naked bodies. This is especially true of the left figure. The ominous threat that lies in this seduction is announced in the yellow-poisonous conflagration in the sky. Just like the dragon in the glass bottle, the color of the sky is likely to refer to the terrible spread of syphilis during those years."

Soon some of Hans's male clients interpreted his paintings of Madonnas as lascivious Eves instead.

But Baldung was critical with those lewd old rich white men too.

"The different embodiments of the figures emphasizes their inequality even more. The half nakedness of the lady's breasts and her unchaste sideways glance suggest that she is a courtesan. Her left arm, which disappears in the direction of her partner's lap, also supports such an assumption."

As always, money is involved in those deals.

"Here the usual humorous tone for depictions of odd couples has given way to sober thoughtfulness. The pale, possibly pregnant woman is not a cunning seductress but stares sadly into space. Is the money in her lap the payment of the vital old man who has "bought" a young wife? This small painting interprets the old theme in a completely new way with high sensitivity and art of representation."


"Mary and Joseph are artistically staged in front of a dark background. The light that illuminates the persons emanates from the Christ Child, who is supported by two angels with magnificent wings made of bird feathers. Mary bends down to the Child with her arms humbly folded. Baldung's ideal of beauty can be clearly seen on her face: A reserved, gentle smile, full lips, and a smooth face surrounded by long, wavy hair. Joseph shows - like the Christ Child - a serious, almost grim face. He holds the opened Old Testament as a reference to the fulfillment of the Messiah's coming, prophesied by the prophets."

Joseph looks somehow suspicious. Has he realized that the new-born Child in front of him is not his son?

"This famous woodcut has experienced numerous interpretations. Some emphasize the biographical component, as the monogram and the unicorn coat of arms refer to the artist himself. The bearded face could be that of Baldung. The horse and the witch take up essential topics of Baldung's work."

"It is also possible that reference is made to a popular legend of the time. It tells of a robber baron who made a pact with the devil. When he hid from the devil in the disguise of a groom, he was killed by a horse. If the reclining figure is not dead, the strange scene may arise from his dreams, but what does Baldung's person have to do with it? The mysteriousness of the scene is the exceptional quality of the woodcut, which is still fascinating today."


"This drawing used to be regarded as an independent work by Baldung, but today it is mostly considered a copy of a lost original from 1534. In fact, compared to authentic works, it seems somewhat schematic and lifeless. Nevertheless, it reveals much about Baldung's self-image. The artist appears as a well-to-do citizen with a pleated shirt, slit beret, and fashionably trimmed beard. Characteristic for Baldung is the view from the corner of the eye - particularly striking here - in a self-portrait."

While the name Dürer dominated the art scene in Germany around 1500, Hans Baldung Grien definitely is on a par artistically.

N.B.: The long texts in italics are translations of accompanying explanations at the Karlsruhe exhibition.
Eingestellt von Red Baron um 22:30