or a witness of the darkest time in German history. 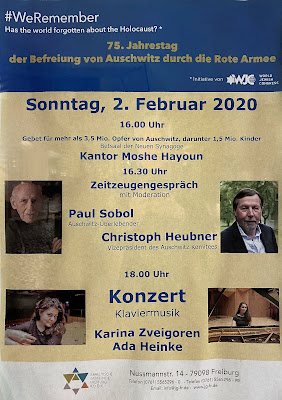 In addition to the official commemoration at Freiburg, the Jewish community scheduled a particularly moving event at the auditorium of the New Synagogue on 2 February, the following Sunday.

They had invited a passeur de mémoire, Paul Sobol, a keeper of memory. As a survivor of Auschwitz, he spoke about his life before, during and after in his French mother tongue. Mrs. Katz wrote, "There were between 220-250 people in the New Synagogue. There have never been so many people since the opening of the synagogue in 1987. Important: There were many young people - pupils and students."

Paul Sobol was born in Paris on 26 June 1926 of working-class Jewish parents who had immigrated from Poland to France. In 1928 his father, being a tanner, took the family to Brussels, so young Paul got his schooling in Belgium and assimilanted easily with the Belgian population. Following the German occupation, Jews had to register and were forced to wear the Star of David. The family went underground.

On 13 June 1944, the hideout was denounced to the Gestapo, and the family arrested. They were part of the last convoy deported from Belgium in the direction of Auschwitz. Paul remembers, "There were about a hundred people crammed into one railroad car. We didn't know how long the trip would take. Finally, we had to stay in the wagon for six days. By the time they opened the doors, only 20 or 25 people had survived in my wagon."

At the infamous ramp at Auschwitz the family was selektiert (separated), "You know, I didn't get to hug my mother goodbye." She was murdered in the gas chambers immediately upon arrival.

At the camp, Paul and his father worked as carpenters. When in 1944, the Red Army was approaching, Paul was forced on a Todesmarsch heading west. Finally, following many more life-threatening situations, at the age of 19 and alone, Paul was released on 1 May 1945 by the US-Army.

His parents and his younger brother never came back.

It wasn't until many years later that Paul wrote a book of testimony: Je me souviens d'Auschwitz (I remember Auschwitz).
Eingestellt von Red Baron um 22:43