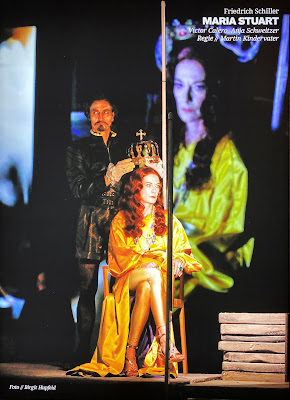 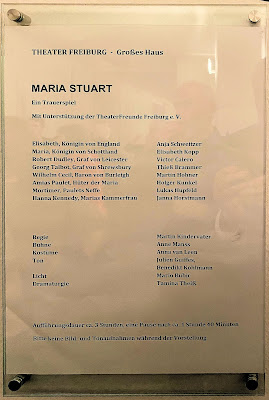 So today's entry in Jerry Coyne's blog was quite fitting:

1587 – Mary, Queen of Scots, is executed on suspicion of having been involved in the Babington Plot to murder her cousin, Queen Elizabeth I.

Friedrich Schiller, the German poet, was a professor of history at the University of Jena. So it is quite natural that many plots of his plays are based on historical events.

Just remember Wilhelm Tell (William Tell), the drama of the Swiss Liberation from Habsburg rule. Wallenstein (the Wallenstein trilogy), the Bohemian general in the Thirty Year's War, deals with a man at the height of his power torn between ambition and high treason. Die Jungfrau von Orleans (The Maid of Orleans) describes the fight of Jean the teenage girl for French independence from English rule. Don Karlos (Don Carlos) the story of the father-son conflict between the Spanish King Philipp II and son Charles over reasons of state and love for the same woman.


Maria Stuart (Mary Stuart) is the drama of confrontation between two queens and cousins, the Protestant queen of England Elizabeth and the Catholic queen of the Scots Mary. Both claim the English throne, but Schiller complicates the saga further by introducing a non-historical Earl of Leicester. The ladies have lost their heads over this unstable character who is intriguing against Elisabeth writing love letters to Maria. So, in addition, the drama develops from a fight about the throne to a mares bite.

Maria is kept in Elisabeth's custody out of fear that she may plot against her cousin. When by Leicesters's ruse, the two queens meet (unhistorically), Maria eventually explodes, blaming the self-proclaimed virgin queen just being a bastard of her father Henry VIII.

Maria's outburst of rage was too much. Elisabeth signs Maria's death warrant in 1587 (see above).

Regretting that she has gone too far, Elisabeth needs some consolation and asks Count Kent, who enters the scene, "Graf Leicester komme her! (Count Leicester come in!)."
Kent's laconic answer, "Der Graf lässt sich entschuldigen. Er ist zu Schiff nach Frankreich (The Earl sends his apologies. He has gone to France by ship)."